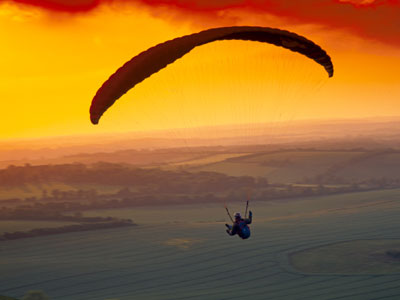 A paraglider at sunset in Berkshire, England.
Andrew Holt/Getty Images

Before we get into how paragliding works, let's investigate its history. Paragliding grew out of parachuting. In the 1960s, the military needed to train parachutists how to perform safe landings. Repeatedly going up and down in an airplane to drop the parachutists was complicated and time-consuming. In order to fit more landing practice into a day, they would attach the parachutists to a truck with a tow rope.

As the vehicle picked up speed, the parachutist would float higher and higher. Then the parachutist would release the tow rope and descend back to earth. Many parachutists soon became more interested in the floating part than the landing part. For fun, they would launch themselves off steep hills and parachute to the ground below, experimenting with how they could harness air currents to stay in the air longer. A new sport was born. The shape and design of the parachutes morphed as paragliders tried different techniques to get better and longer rides.

The solution came with the invention of the ram-air parachute. Also known as the parafoil, it changed everything. Developed by Domina Jalbert in 1964, the ram-air parachute altered the shape of the chute from round to rectangular. The parachute -- called a wing or sail -- was broken up into cells. As the sail caught the wind, air would "ram" into these cells, filling up or inflating the sail. The shape allowed the wing to glide or float rather than immediately descend, as a traditional parachute would.

In 1978, three friends in Mieussy, France used their modified parachutes to jump off a mountainside and glide to the ground, the first time it had been done. This is considered the beginning of modern paragliding.

Paragliding equipment has evolved, with more complicated suspension and steering systems. Nevertheless, they're all based on Jalbert's original design. Extremely popular in Europe, paragliding is still a micro-sport in the United States, with around 5,000 or so participants [source: Becher]. However, it's climbing quickly in popularity.

Next, we'll take a look at paraglider parts.