The Palace of Versailles: The world's most opu­lent playground for royalty! A chateau larg­e enough­ to house 6,000 courtiers! A palace fit for a king!

And not just any king, but Louis XIV, the "Sun King," who reigned for 72 years and whose self-glorification knew no bounds. Starting in 1661, he transformed a humble hunting lodge into a glittering palace. He drained swamps and moved whole forests to create 250 acres of formal gardens, tree-lined paths, flowerbeds, lakes, and fountains. And this filled only a small portion of the grounds -- the entire estate covered 2,000 acres. 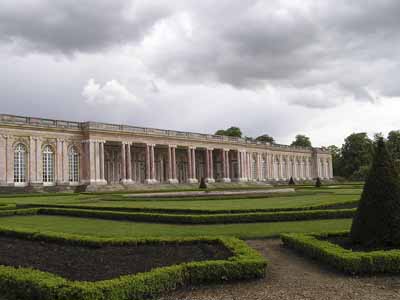 Versailles served as France's political capital and the focal point of the court from 1682 until 1789. It was Louis XIV's motive to remove himself (and his scheming nobles) from the political intrigues of Paris, so he created a place where the court could live under his watchful eye. The palace's size and opulence exhibited his supreme wealth and trumpeted his power as an absolute monarch.

Building Versailles required some 30,000 laborers and was so costly that it nearly wiped out the coffers of France. The main building contains grand halls and bedrooms that interior designer Charles LeBrun decorated with every ostentatious adornment imaginable.

The Grands Appartements of the palace are lavish showplaces filled with murals, paintings, sculptures, velvet draperies, Savonnerie carpets, gilded bronze, and tinted marble. These salons are dedicated to Greek deities such as Hercules and Mercury. Louis XIV chose the Salon of Apollo, the sun god, to serve as the throne room for the Sun King.

Most spectacular of all is the Hall of Mirrors, a 235-foot-long drawing and ballroom­ lined along one side with 17 huge mirrors -- fixtures that were staggeringl­y expensive at that time in history. In the glass, the courtiers could admire their own fabulously costumed selves as they danced.

The mirrors were also designed to reflect the ceiling frescoes, which illustrate and pay tribut­e to the early years of Louis XIV's reign. On the other side of the room, a row of windows opened onto vast gardens and the sunset. 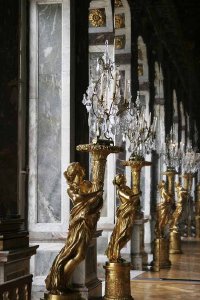 iStockphoto
Many wars have been settled through peace talks and treaties negotiated at Versailles. The Treaty of Versailles that ended World War I was signed in the Hall of Mirrors in 1919.

In the white-and-gold baroque Chapel Royal, Louis XVI wed Marie Antoinette in 1770, when both were teenagers. Among further palace additions were a paneled library, the Clock Room (where Mozart performed at age seven), and the Opera, a huge oval theater illuminated by 10,000 candles.

Creating the gardens at Versailles required legions of workers and the genius of landscape designer André Le Nôtre, who laid out everything in the most formal French style.

The central axis of Versailles's gardens is the mile-long Grand Canal, which is situated to reflect the setting sun. Around it spread geometric expanses of plantings, flowerbeds, paths, ponds, and lakes. Not to mention fountains -- some 1,400 of them at one time, including a spectacular fountain in which a horse-drawn chariot carries a triumphant Apollo -- yet another reference to the glory of the Sun King.

To relieve the formal design, eccentric buildings called follies are scattered here and there -- as well as a grove where the courtiers danced in summertime amid rock gardens, shells, and decorative lamps. Marble and bronze statues are arrayed along paths and tucked into the foliage. In the Orangery, 3,000 trees once thrived through the winter cold.

Two smaller palaces stand on the far side of the gardens. Louis XIV built the pink marble Grand Trianon as a place to escape the relentless etiquette of court life. (In the main palace, for example, the king usually dined alone at a table in view of hundreds of onlookers. On other occasions, diners were seated in his presence in strict protocol by rank. Simply cooking for the palace's constant banquets required a kitchen staff of 2,000 people.)

The Petit Trianon was a love nest built by Louis XV, who trysted there with Madame du Barry. Later this neoclassical mini-palace found favor with Marie Antoinette, who also wanted to get away from the stiff formality she found at the main palace.

Nearby was the most charming hideaway of all -- the Queen's Hamlet, a sort of play village and farm built for Marie Antoinette's amusement. Among the thatched cottages, a watermill, and a lake, she and her court acted out a fantasy of peasant life.

It is ironic, perhaps, that this same queen's lavish spending and frivolity eventually led to her royal downfall in 1789. That was when the French Revolution's mobs marched on Versailles and carried Marie Antoinette and Louis XVI away to Paris. Ultimately, in 1793, they were led to the guillotine.

To learn more about France and other vacation destinations, see:

Jerry Camarillo Dunn Jr., has worked with the National Geographic Society for more than 20 years, starting as a staff editor, writer, and columnist at Traveler magazine, then writing travel guides. His latest work is National Geographic Traveler: San Francisco. Dunn’s Smithsonian Guide to Historic America: The Rocky Mountain States has sold more than 100,000 copies. His travel pieces appear in newspapers such as the Chicago Tribune and The Boston Globe. Jerry Dunn's stories have won three Lowell Thomas Awards from the Society of American Travel Writers -- the highest honor in the field. He also wrote and hosted a pilot episode for a travel show produced by WGBH, Boston's public television station.­