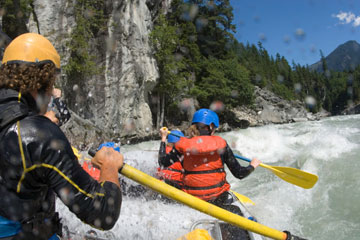 OK, so you've got a spiffy new kayak, canoe or raft, and you're itching to try it out on a whitewater rapid. But while you want those rapids to be challenging enough for you to have an exhilarating time, you don't want them to be too challenging for your level of aquatic skills, experience and physical hardiness. So how do you pick the right stretch of river?

Thankfully, the safety experts and aquatic sports enthusiasts at American Whitewater -- a national organization founded in 1954 that works to preserve river rapids and helps people to enjoy them safely -- are available to bail you out with some guidance. They've created the International Scale of River Difficulty, a standardized rating system that divides stretches of whitewater into six main categories. Even beginners can venture safely into the relatively calm waters and minimal obstructions of Class I rapids. At the other end of the scale, Class VI contains rapids that are so rough and rocky, you probably should avoid them entirely, unless you have a death wish. Various versions of the scale are now used by whitewater organizations throughout the world. But American Whitewater's scale, which was totally re-researched and updated in 1998, gives the most detailed information.

In this article, we'll talk about what the various categories and sub-categories mean and how you can use that information to have a safe, fun whitewater experience. But first, here's a little about the history of the rating system and how the ratings are actually determined.

How Do They Rate Whitewater, Anyway?

Paddlers have been tackling rapids for centuries, dating back to the days when paddling was primarily a form of transportation rather than pleasure. And probably for just as long, they've been seeking advance information about the degree of difficulty and the potential hazards of stretches of whitewater. In the early 1800s, explorers Meriwether Lewis and William Clark, who traveled the American wilderness largely by canoe, were careful to seek advice from local Native American guides about the location, size and difficulty of rapids that lay ahead. Alas, those highly informal ratings weren't always reliable; in Lewis' and Clark's written history of the expedition, for example, they describe encountering one stretch filled with treacherous rocks that "we found more difficult than the report of the Indians had led us to believe" [source: Lewis and Clark].

Even after paddling evolved into a recreational sport in the 1900s, the difficulty of getting dependable guidance about whitewater continued to bedevil rafters, kayakers and canoeists. Other paddlers tended to describe rapids though subjective comparisons -- i.e., "Lumpy Falls is almost as hard as Heavy Falls…with a little bit of Twister Rapids thrown in" -- that were pretty much useless unless you'd actually paddled in those places, too [source: Belknap].

Finally, in the 1950s, the newly formed American Whitewater association came up with a solution: a numerical rating system. The AWA's brainstorm evolved into the International Scale of River Difficulty, variations of which became popular around the world [source: AmericanWhitewater.org].

In the late 1990s, AW compiled the most recent update of the scale, based upon information solicited from 100 expert paddlers. About 80 actually wrote ratings for 3,000 different rapids, while others added comments. In addition to describing in detail the features and hazards of various stretches of whitewater, the experts were asked to rate their difficulty numerically against a list of benchmarks -- well-known rapids whose degree of difficulty was generally agreed upon [source: Belknap].

The experts were asked to compare a particular rapid to the benchmark example in terms of specific characteristics, such as the speed and power of the water flow, hazards like bridge pilings and strong currents that swirl around rocky obstacles, water temperature, and the time required to make it through the rapid. American Whitewater also asked the experts to focus on the technical difficulty of navigating a rapid, rather than the potential danger involved [source: Belknap]. (That makes sense, since it stands to reason that expert paddlers, who have the skill to handle rapids that would put the fear of God into ordinary mortals, are likely to have a very different perception of risk.)

In the next section, we'll talk about the categories in the system and what they mean.

What Are the Categories in the Rating System?

There are the six difficulty classes in American Whitewater's rating system. Rapids that are near the bottom or the top of a particular category are additionally designated with a minus or plus sign.

Class III (Intermediate): "Rapids with moderate, irregular waves which may be difficult to avoid and which can swamp an open canoe. Complex maneuvers in fast current and good boat control in tight passages or around ledges are often required; large waves or strainers may be present but are easily avoided. Strong eddies and powerful current effects can be found, particularly on large-volume rivers. Scouting is advisable for inexperienced parties. Injuries while swimming are rare; self-rescue is usually easy but group assistance may be required to avoid long swims." Example: Yankee Jim's Revenge, Yellowstone River, Mo. [sources: Safety Code of American Whitewater, List of Class III Rated Rapids].

Class IV (Advanced): "Intense, powerful but predictable rapids requiring precise boat handling in turbulent water. Depending on the character of the river, it may feature large, unavoidable waves and holes or constricted passages demanding fast maneuvers under pressure. A fast, reliable eddy turn may be needed to initiate maneuvers, scout rapids or rest. Rapids may require 'must' moves above dangerous hazards. Scouting may be necessary the first time down. Risk of injury to swimmers is moderate to high, and water conditions may make self-rescue difficult. Group assistance for rescue is often essential but requires practiced skills. A strong eskimo roll is highly recommended." Example: Ned's Gulch, Merced River, Calif. [sources: Safety Code of American Whitewater, List of Class IV Rated Rapids].

After Class IV, the system changes a bit, because we're getting into waters that only virtuoso paddlers should dare to attempt, and some that even they might want to stay out of:

Class V (Expert): "Extremely long, obstructed or very violent rapids which expose a paddler to added risk. Drops may contain large, unavoidable waves and holes or steep, congested chutes with complex, demanding routes. Rapids may continue for long distances between pools, demanding a high level of fitness. What eddies exist may be small, turbulent, or difficult to reach. At the high end of the scale, several of these factors may be combined. Scouting is recommended but may be difficult. Swims are dangerous, and rescue is often difficult even for experts. A very reliable Eskimo roll, proper equipment, extensive experience and practiced rescue skills are essential." Class V rapids range in difficulty more than other rapids, so they're on a scale of increasing difficulty - eg. 5.0, 5.1, and so on. Example: Damnation Alley rapid, Encampment River, Wy. [sources: Safety Code of American Whitewater , List of Class V Rated Rapids].

Class VI (Extreme and Exploratory Rapids): "These runs have almost never been attempted and often exemplify the extremes of difficulty, unpredictability and danger. The consequences of errors are very severe and rescue may be impossible. For teams of experts only, at favorable water levels, after close personal inspection and taking all precautions. After a Class VI rapids has been run many times, its rating may be changed to an apppropriate Class 5.x rating." Example: Whirlpool rapid, Niagara River, during times of higher flow [sources: Safety Code of American Whitewater, Niagara FAQ].

In the next section, we'll talk about how to use the ratings when selecting a rapid to run. 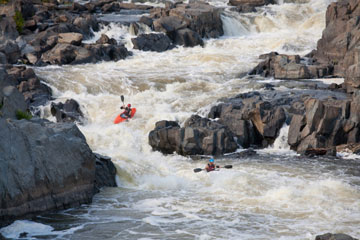