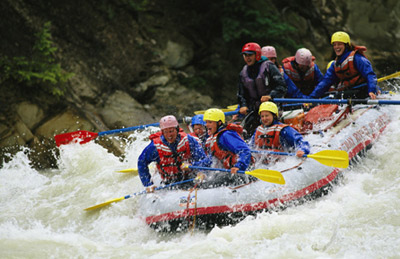 A team of rafters rides out the rapids of the Kicking Horse River in Yoho National Park, British Columbia.
Marcel Antonisse/AFP/Getty Images

Most white-water rafting trips are group adventures in rented paddle rafts or oar rafts. Choosing which type of raft will depend on what type of outing you're planning.

Paddle rafts usually seat a group of four to eight people and a guide. These inflatable, plastic rafts are quick in the water and may be taken out on any level of whitewater. Most commercially guided services use paddle rafts. Everyone is expected to paddle while a guide positioned at the rear of the boat shouts out instructions. There's also a small version of a paddle raft, the sporty and challenging R2, made for two people.

If you're looking for a less-participatory adventure, try renting an oar raft. Oar rafts are inflatable and powered by a guide with a set of long wooden oars. These rafts usually seat three to five people and are taken on easy to moderate river runs.

There's also a hybrid -- oar rafts with paddle assist. These rafts are inflatable and maneuvered by a guide with a set of long wooden oars, but the passengers help with the paddling. These rafts are used on intermediate to advanced rapids.

Rafts are also categorized as either self-bailers or catarafts. Self bailers look like traditional inflated rafts but the edges of the base are laced to the sides of the raft allowing water to flow across the floor, down the edges and out through the lacings. Most modern rafts are self bailers.

Catarafts are made of two inflatable tubes held together by a metal frame and are easier to maneuver than self bailing rafts. They're designed to hold fewer passengers and are good options for people who want to own their own raft.

There are many other alternative white-water river crafts, big and small, that you may encounter as you become more skilled with white-water expeditions. For example, if you take a rafting trip in the Grand Canyon, you may come across a J-rig -- a big pontoon-style boat that's often motorized.

For people who are interested in solo or two-person adventures, ducks are small, inflatable and self-bailing kayaks that can be paddled down easy to moderate rapids. For the more performance-oriented river runners, hard-sided kayaks (made of rigid plastic) and canoes (made of fiberglass, Kevlar or plastic) are popular choices.

Next we'll learn about "river rats," what to expect from guided white-water rafting trips and some basic paddling techniques.

How does your raft stay afloat as you traverse the whitewater? The explanation lies in a principle called buoyancy. Buoyancy is the tendency of an object to float -- or sink -- when placed in water. When your raft enters the river, it displaces some of the water and floats. The raft displaces the same volume of water as its own weight. The water offsets the pull of gravity and pushes the raft up. If your raft was so heavy it couldn't push away enough water to equal its own weight, the raft would sink.