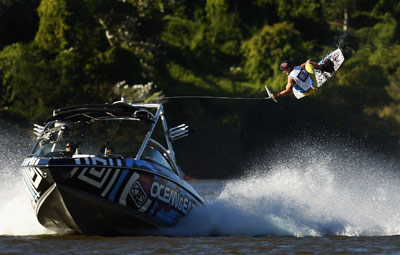 You're standing on a small board while a powerboat pulls you gently through a serene lake. This calm, relaxing ride quickly changes into a breathtaking and exhilarating adventure. You clench the rope handle and swiftly turn into the wake of the boat, flipping 20 feet (6 meters) into the air and landing back in the water. This thrilling experience brings back seasoned wakeboarding veterans and attracts new adventurers to this increasingly popular water sport.

Wakeboarders leverage the wake of power boats to perform gravity-defying jumps and maneuvers. The wet and wild cousin of skateboarding, snowboarding, waterskiing and surfing, wakeboarding is one of the fastest-growing water sports in the world. Nearly three million people in the United States participate in wakeboarding [source: Regenold]. Four million people worldwide are wakeboarding enthusiasts [source: USA Wakeboard].

Wakeboarding came onto the scene in the 1980s when surfers started hitching rides on boats with a rope, similar to waterskiing. The wakeboarding craze caught on, and surfers began to design actual wakeboards. These new types of boards maintained balance and steadiness, increased speed and power, and produced larger waves while being pulled by a motorboat. By the 1990s, wakeboarding became a recognized extreme sport and it developed a culture which now includes specialized gear, television coverage, competitions and professional organizations.

Now let's learn all about the wakeboard. 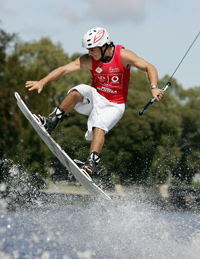 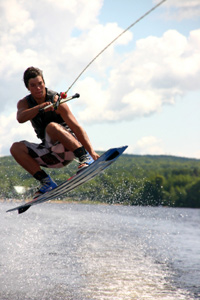 Once you master basic wakeboarding moves, you can also learn to do tricks like this.
Copyright© iStock/Julie Masson Deshaies

Wakeboarding is a fairly easy sport to learn, especially if you have surfing experience. It's a little different than waterskiing, however, because wakeboards travel at lowered speeds and different angles, which might challenge a person accustomed to waterskiing. Whatever your level of water sport experience, in only a few lessons, you can learn how to mount your board, develop skills in several wakeboarding positions and even attempt a jump.

First things first: Getting up onto your wakeboard might seem daunting to a beginner, but it's actually quite easy. Start by sitting with your knees bent, your arms straight, and the board perpendicular to the boat. Let the boat pull you up as it takes off. Once you're standing, maintain equal weight on both feet. Keep your head up and your shoulders in line with your hips.

These two movements refer to the board itself, rather than the rider. In gymnastics terms, a roll is similar to a somersault as the board goes end over end. A flip is like a cartwheel as the board moves nose over tail.

Once you've mastered the two basic jumps, you'll want to increase the height you pop into the air from the wake. Pop or air refers to the amount of space between you and the water. The higher the jump, the more air you've got. The most important part of getting more air is the way you edge into the wake. Gradually increase your edge as you approach the wake. Then, jump off the top of the wake by extending your knees. You'll get more lift and more air.

A few other maneuvers include:

When you first begin wakeboarding, it's generally a good idea to start with a boat speed of 20 mph (32 kph). This speed will allow you to develop control and will give you enough speed to get lift on jumps. As you develop confidence in your skills, you can build up speed to 23-24 mph (37-39 kph). Keep in mind your body size, rope length and comfort zone when you decide the speed of your boat. 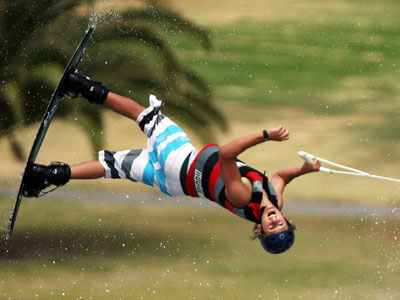 Before you learn to jump, it's helpful to understand some of the principles of physics that apply to wakeboarding:

The two main forces that most influence the way a wakeboard moves are the resistance (drag) that the board encounters when moving through the water and the tension of your rope. Tension is a reaction force: It's directly related to how much force is applied to a rope. The harder you pull on a rope, the higher the tension and the more force the rope exerts on you. In order to keep your wakeboard afloat, you need the tension from the rope to counteract the pull of gravity and stop you from breaking through the water's surface tension. The rope's tension can also give you additional speed. If you lean back, causing the rope to stretch a little farther, you apply more force to the rope, and it simultaneously applies more force to you. You can use this force to get more power behind your tricks.

Growing in popularity throughout the world, wakeboarding draws thrillseekers for both fun and serious competition.
Paul Kane/Stringer/Getty

Now that you've got the science of wakeboarding under your belt, let's use it to jump off a wake. Lean back and toward the center of the board in order to lower your center of gravity. This motion increases the ropes tension and gives you some additional speed as you take off. A few feet before you hit the wake, slowly stand up. Bend your knees and slowly edge toward the wake while keeping the tension of the rope tight. Along with the tension of the rope, this motion helps you jump upward off the wake. The rope will pull you forward, also pulling up your center of gravity. 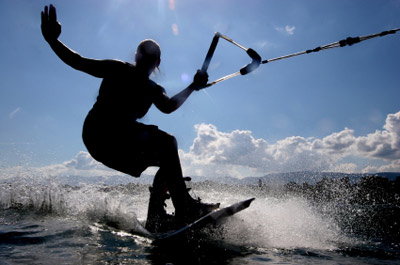 How Core Strength Training for Runners Works
Who was the first scuba diver?
How Black Water Rafting Works