Browse the article How Wakesurfing Works 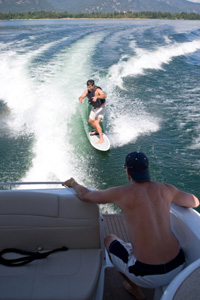 Living far away from the ocean is no longer a barrier to finding some good waves to surf. You just need to create your own. Wakesurfing, a relatively new water sport and an offshoot of wakeboarding, is gaining popularity among novices and seasoned water-sport athletes alike. It's still a fairly young sport, but there's an annual World Wakesurfing Championship and many other professional-level competitions around the United States. Adherents of wakesurfing trumpet its relative safety compared with other water sports and the ease with which aspiring wakesurfers can take up the activity

Wakesurfing involves a surfer trailing behind a motorboat on a short surfboard that's about five feet (1.5 meters) long and literally surfing through the boat's wake without being attached to the boat. The boats are freighted with extra weight to increase the amount of wake and make the sport more challenging. At times, a wakesurfing boat may have so much extra ballast, it looks as if it may tip over, but these are actually ideal conditions for producing good wake. A boat captain may even ask his passengers to shift to the same side to add extra ballast to that area.

Wakesurfing starts with a surfer lying in the water with his or her feet on the board, ready to quickly stand up. The surfer holds onto a towrope as the boat picks up speed, eventually topping out anywhere from 9 to 11 miles per hour. The surfer then jumps into a standing surfing position, drops the rope and surfs through the wake the boat creates. A surfer may be able to ride the wave for as long as five minutes, and more advanced surfers can perform tricks, spins and other stunts [source: Regenold].

But how can a motorboat create waves that mimic that of the ocean? And is it really possible to pull off spins and aerial tricks on a relatively calm lake? Keep reading to learn all about this growing sport, beginning with the physics of wakesurfing.

The Physics of Wakesurfing

Wakes from motorboats create waves similar to those found in oceans plied by regular surfers. These waves tend to be on the smaller side; however, a four-foot wave on an otherwise calm lake is more than adequate to sustain a wake surfer for a few minutes' ride. And, like ocean waves, there's a break and a curl, which surfers can ride and use to perform tricks like dips, sharp turns and spins.

Because the boat is continually creating waves as it moves, there's a constant curling effect, which allows some wakesurfers to carve through a wake for several minutes. They're able to perform tricks and alternately move closer to and farther from the boat. The forward inertia created by initially holding onto the towrope helps the surfer stay afloat, along with the constant motion of an ever-churning wake and the water's strong surface tension. Add to this the buoyancy effect of the surfboard: The board is less dense than the water, and it distributes the surfer's weight widely, allowing him or her to skim along the surface of the water.

The surfer is on one side of the wake, surfing on it, cutting against it and slashing with the board to surf up onto the curl, allowing him or her to perform 360-degree spins and other stunts. If a surfer is to the right of the wake (in relation to someone looking at the wake from the rear of the boat), he or she is riding on the regular foot side, with the left foot forward. The other side is typically for goofy-foot riders, those who ride with the right foot forward.

A surfer may fall for a variety of reasons, including going too far outside the wake -- where the surface tension is lower -- performing a stunt inaccurately, or stepping too far forward on the board and causing the tip of the board to submerge. If the boat comes to a sudden stop, the surfer may also lose his or her balance.

Because wakesurfing also depends on the type of boat used to create wakes, surfing conditions can vary widely. Keep reading to learn what boats are best for wakesurfing.

Wakesurfing boats are specifically weighted to maximize wake. These weights can be made of heavy lead or fat sacs, water-filled ballast bags, and they're used to tilt the boat to one side. Some boats are weighted so much -- and consequently sag so much in the back -- that they look as if they're about to sink into the lake.

Besides being weighted to one side, wakesurfing boats have a swim deck, a small platform at the rear of the boat that a spotter stands on to watch the surfer and to pull in the rope after he or she lets go. The swim deck also provides more protection for the surfer; along with the rudder, it's one more barrier between the surfer and the propeller.

Some wakesurfing boats are known for the quality of waves they create. In fact, one wakesurfer claims that his $50,000 boat creates a practically unending wave, the only limit to riding it being a surfer's stamina [source: Regenold].

Wakesurfing can also be done with large boats, such as yachts, but the process is more difficult -- they take longer to gather speed, and they're less maneuverable, which means it takes longer to circle back and pick up fallen surfers. Because of their M-shaped hulls, these large boats also create different kinds of wakes than smaller boats, so the surfer will have to adapt accordingly. Surfers must stay a safe distance from these boats -- they often have exposed propellers. But the advantages of wakesurfing with large boats include being able to wakesurf in tandem with another rider and surfing on larger wakes that are more akin to real waves.

While some wakesurfers chase after oil tankers or other large ships to surf in their wakes, this practice is dangerous and often illegal [source: Patoski].

It's difficult to wakesurf without an adequately weighted boat -- one weighted to either the left or right side, which allows it to produce a larger wake. Large wakes break to one side, simulating a small, but surfable, ocean wave. The amount of extra ballast used depends on what your boat can handle. If you're a frequent surfer, you may want to install fat sacs on your boat and connect them to the ballast system.

To stand up, experienced wakesurfers recommend that you start by lying in the water with your heels resting on the board. As the boat picks up speed, hold on to the rope and use its tension to pull yourself onto the board. Bend your knees for balance and position your feet shoulder-width apart. You will likely want to stand toward the back of the board so the front won't catch the surface of the water, submerging the board. Your stance will vary depending on your personal preference, skill level and the type of board you use.

Once you feel confident on the board, it's possible to adjust your stance to move closer to and farther from the boat. Putting more pressure on your back foot will slow you down, causing you to back off from the boat. Leaning on your front foot will effectively speed you up, causing you to move forward in the wake. But be careful: too much pressure in one direction and you may wipe out. Even so, experiment with your footing to find where in the wake you're best able to surf.

If you're a boat driver and your wakesurfer wipes out, don't immediately turn around back into the wake -- you may unintentionally enter the waves you created and flood the boat. Instead, slow down -- or put the boat in neutral -- and circle back widely, away from the wake.

Wakesurfing boats must have inboard motors, rather than outboard motors with exposed propellers, to prevent the surfer from being injured. An inboard motor is located farther forward on the boat under the stern, and the motor is usually located a few feet in front of the rudder. And while the boat should be heavily weighted to boost wake, it shouldn't be weighted beyond the maximum load designated by the boat's manufacturer.

As with all water sports, wakesurfers should wear personal flotation devices. In fact, a PFD may be required by law in your state.

A proper rope is key for wakesurfing -- surfers typically use thick ropes, which are sometimes knotted to improve grip. The rope doesn't have to have a handle, but if it does, it should be smaller than the handle on a wakeboarding rope to prevent it from getting caught on the board.

When someone is wakesurfing, boaters often put a flag up to signal that someone is in the water -- the flag warns other boats not to get too close and to look for people in the water.

Because wakesurfing boats travel at low speeds, it's possible for carbon monoxide to pool in the air around the swim deck, so boaters should be careful about congregating in that area for extended periods of time. If you experience a headache or dizziness, inform the other boaters and leave the area.

For more information on wakesurfing, see the links on the following page.

Should You Wear a Helmet?

Many wakesurfers wear helmets; however, helmets aren't considered essential because wakesurfing occurs at lower speeds than most other water sports.