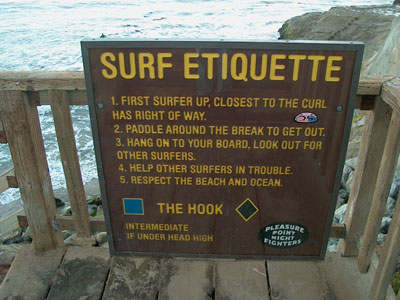 Tall, powerful waves that break cleanly are at the heart of surfing. However, the qualities that make these waves alluring can also make them dangerous. Waves start to break when they reach water that's about 1.3 times their height. In other words, even if the wave seems to be far from shore, the water under it isn't very deep. In addition, since many waves break over coral reefs, the surface under the water can be sharp and jagged. Surfers who wipe out, or fall off their boards, can potentially hit submerged obstacles or the hard surface under the water.

The water itself can become a hazard as well. The water that reaches the shore must return to the sea, and in the right conditions, this retreating water can form a rip current. A rip current is a fast-moving current moving toward the open sea. Swimmers who are caught in a rip current can be swept out further than they can swim back, or they can exhaust themselves fighting against the current. Most experts recommend swimming parallel to the shore to escape the pull of a rip current. See How Rip Currents Work to learn more.

As surf areas become more crowded, surfers also have the potential to collide with each other. This is one of the reasons why responsible surfers follow a code of etiquette that determines who has the right-of-way on a wave. Although these guidelines can vary from beach to beach, in general, the surfer closest to the wave's break has the right-of-way. If a surfer is already upright on a wave, he has priority over the other surfers.

Even if all of the surfers in an area are following guidelines for courteous riding, collisions are still possible. This is especially true if a surfer falls off of the board and loses it. In addition, surfers can collide with debris and trash floating in the water. This is one reason why surfers have started organizations like Surfers Against Sewage to fight for cleaner water.

Another common surfing hazard is the wildlife native to the ocean. Some people associate shark attacks with surfing, but these attacks are relatively rare. However, sharks do live near many popular surfing areas, and it's easy for a shark to mistake a paddling surfer for one of its food sources. Surfers can also encounter jellyfish, rays and other sea animals that can bite or sting.

Surfing's popularity has led to several sports that use modified surfboards, including:

Bodysurfing involves riding the waves without using a surfboard.