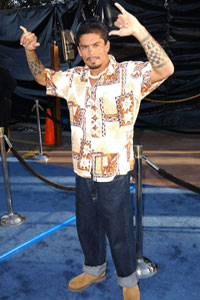 Surf gangs have been protecting their beaches for decades, but localism really took hold in the 1970s. The invention of the Boogie Board had a lot to do with it. The soft foam body board was a hit with kids who didn't know how to surf but yearned to ride the waves. The other thing that happened in the 1970s was the rise of professional surfing competitions. All of the sudden there was big money to be had as a professional surfer, and this made the competition for waves more cutthroat.

Ask most surfers about whether or not there's a local gang, and they'll likely respond with a quick "no." Even well-known surfer gangs like Hawaii's Wolfpak refer to themselves as family, not a gang. But police see it differently. If a group of surfers get together, name themselves and carry out acts of vandalism and violence to protect their turf, the law considers them a gang. The Wolfpak is notorious for protecting Oahu's famous North Shore.

The most well-known Pak member, Kala Alexander, is a muscle-bound professional surfer with Wolfpak tattooed across his knuckles. Alexander has served time in prison for assault, and his reputation as a brawler is more legendary than his surfing skills. Alexander claims that it's all about respecting local customs. In recent years, the Wolfpak has tried to repair its image by taking part in volunteer beach cleanups. Alexander himself has made appearances in the movies "Blue Crush" and "Forgetting Sarah Marshall," and filmed a reality series about the Wolfpak called "The 808" that he's shopping to television networks.