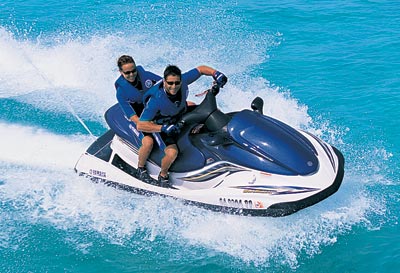 The steering mechanism of a personal watercraft is very simple.

The handlebars are connected to a steering cable. When the operator turns the handlebars, the cable moves the steering nozzle, which changes the direction of the jet of water. Some models are also designed to allow the operator to lean into turns as they would on a motorcycle.

A trigger on the handlebars controls the throttle, allowing the operator to accelerate. The throttle is as important to steering as it is to acceleration. Without water from the steering nozzle, the boat cannot change direction. Instinctively slowing down to avoid an accident is dangerous and can result in a complete loss of steering power. If this happens, the craft will float in a straight line until friction from the surrounding water brings it to a stop. Newer models use a computer to re-start the jet drive if the operator simultaneously releases the throttle and turns the handlebars hard in one direction.

Some models can go in reverse using a simple shroud that lowers over the steering nozzle. The shroud forces the water into a U-turn, sending it under the boat instead of behind it. Since the rear of the craft always moves in the opposite direction of the flow of water, this makes the craft go backward. This feature can help get the boat into and out of the water or get out of a tight space. It is not designed to slow or stop a craft that is moving at high speeds.

It's important to understand a few safety concerns before getting on a personal watercraft.

First, keep in mind that passengers ride on a personal watercraft instead of in it (and they do so without restraints). If you combine that with speeds of up to 65 miles per hour and the absence of brakes, crashes are potentially deadly.

Personal watercraft have no running lights, which means they're especially dangerous at night. The jet intake and steering nozzle can also be dangerous because of the force of the moving water.