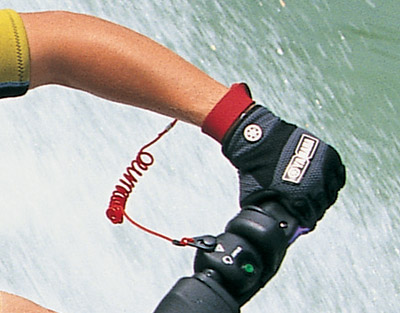 A noticeable difference between marine and automotive engines is the cooling system. Instead of using a radiator, a marine engine uses the surrounding water to control temperature. Water flows through the engine or through a closed system that includes a chemical coolant.

The engine starts the same way a car engine does. The ignition button, usually found on the handlebars, sends a signal to an electric starting motor. The motor turns the engine to get it started. Then, the engine takes over powering the craft.

All newer models of personal watercraft have a pin or key that inserts into a slot near the ignition. The pin is attached to a lanyard that connects to the operator's life vest or wraps around his or her wrist. The boat will not start or run without the pin in place. If the operator falls overboard, the lanyard pulls the pin out, and the craft coasts to a stop. This keeps the boat from traveling very far and reduces the likelihood of a collision.

Personal watercraft make a very distinctive, high-pitched sound, which some people feel disturbs residents, wildlife and other boaters. Recent technological advances have made personal watercraft significantly quieter. These include: