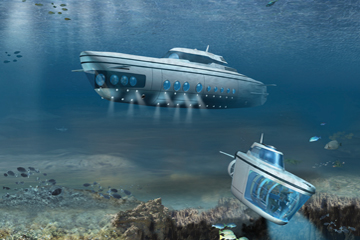 A company called U.S. Submarines, Inc., has taken the luxuries of the fully-loaded yacht and integrated them into the personal submarine. Interiors can be selected from a catalog, or the prospective buyer can work with a designer for a 100 percent custom job. Regardless of the depth of their subs, they remain pressurized at one atmosphere, leaving the comfy climate-controlled interiors feeling like you're above the surface at all times. Their 116-foot (35-meter) Seattle 1000 sub has five staterooms, generous common areas and looks much like a small yacht, save for the porthole windows that line the hull on both sides of the craft.

On the surface, the Seattle runs on diesel fuel, but once submerged, it switches over to battery power for a nice, quiet cruise. It can dive as far as 1,000 feet (300 meters) and can travel at a rate of about 14 knots underwater. In addition to the viewing portholes on both sides, the Seattle has a main lounge on the bow that is almost entirely see-through. If you're into scuba diving, you can take advantage of the optional diver decompression chamber, allowing you to venture out and re-enter while submerged.