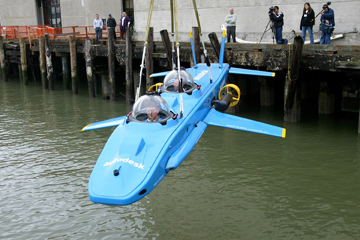 The predecessor to the Super Falcon, the Super Aviator, prepares for takeoff.
Justin Sullivan/Getty Images

Paying $30,000 to $250,000 for a personal submarine is nothing to sneeze at, but the super wealthy take things to an entirely different level. High performance and ultra-luxurious personal submarines can be had from about $1.5 million to $78 million, depending on what your needs (or wants) are.

The Deep Flight Super Falcon was designed by the original personal sub genius, Graham Hawkes, and his company, Hawkes Ocean Technologies. The idea of the Super Falcon was to get as close to an underwater fighter jet as possible. They came pretty close, which is probably why Hawkes refers to his excursions in the Super Falcon as "flights" instead of dives. The Super Falcon has achieved speeds and maneuverability never before seen in a submarine. The Falcon seats two people in their own separate cockpits, has a long nose and two rear wings. The final design ended up looking much like a fighter jet, only a few feet wide and sleek as a bullet.

The 500 pounds (226.8 kilograms) of thrust it offers enables the Falcon to do something no other personal sub can do -- surface vertically like a rocket at launch. The clear shells that house the operator and passenger are made from a proprietary composite that can keep the craft pressurized at almost 3,000 feet (914 meters). The Falcon uses fighter jet technology for its fly-by-wire control system, and can cruise as fast as 6 knots underwater, about the speed of your average dolphin. If a Super Falcon is for you, plan on dropping between $1.7 and $2 million.