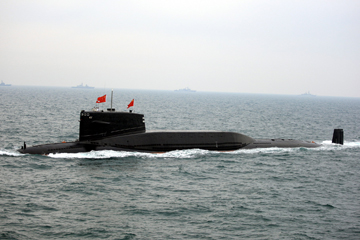 Everybody knows that submarines submerge into the water and back up again to the surface at will. That's the whole point. But you may not know just how. It's actually a pretty simple concept. Heavy steel ships can float because they displace an amount of water equal to their weight. When the water is displaced, it creates something called buoyant force. This upward force allows boats and surfaced subs to float. Submarines can control their buoyancy, making it possible to sink and then surface again.

A submarine controls its buoyancy with the help of two sets of tanks (ballast and trim) that line the craft. These tanks can be alternately filled with water or air. Water makes the sub submerge; air makes it surface. When the tanks fill with water, the air is vented out the top until the submarine begins to sink. This is called negative buoyancy. Compressed air on board the sub is what allows you to breathe while submerged.

For large submarines, short wings toward the rear of the craft called hydroplanes allow the sub to move up and down. When a sub gets to cruising level, the hydroplanes go flat, allowing the sub to level out for travel. Just like a boat, a submarine uses a tail rudder to steer left and right. When the submarine is ready to surface, the water in the tanks is displaced with the compressed air, and the hydroplanes are angled to force the rear of the sub down. This makes the sub rise and point up toward the surface. When the sub needs to submerge again the whole process repeats itself.

On the next page, we'll dive into the world of the personal submarine.