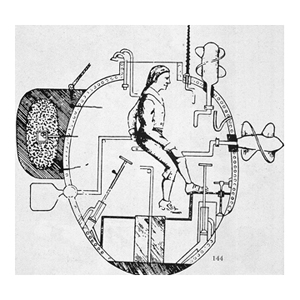 The Earth is made up of about 70 percent ocean, with an average depth of about 3,200 feet (1,000 meters). That's a lot of water. Since man first figured out they could build vessels that would stay afloat, they took to the seas. This was fun for a while, but with so much going on beneath the surface, it wouldn't take long before we longed to dive deep to see what's going on down there.

The submersible watercraft was first envisioned by Leonardo da Vinci in one of his famous sketches in the early 1500s. Sometime in the late 1570s a British mathematician and innkeeper named William Bourne scratched out some plans for a submarine. He wrote:

"It is possible to make a Ship or Boate that may goe under the water unto the bottome, and so to come up again at your pleasure. Any magnitude of body that is in the water, having always but one weight, may be made bigger or lesser, then it shall swimme when you would, and sink when you list."

It may be 1570s English, but the concept was undoubtedly that of a submarine. He's basically saying that if you make the boat heavier than the weight of the displaced water, it will sink (purposely). Fast forward about 50 years when a Dutch inventor named Cornelius van Drebbel built the first working submarine. Of course, there were no engines at this point, so Drebbel and his 12 oarsmen hit the Thames River and submerged for about three hours. The first military sub, The Turtle, was built in 1776 by David Bushnell and was powered by hand-cranked propellers. The United States military used The Turtle during the Revolutionary War, to middling success.

Skip ahead again to the 1890s, when the first modern-style subs were built. Two rival inventors developed these two designs, which were purchased by the militaries of the United States, Russia and Japan. These subs were powered by petroleum or steam on the water's surface and used electric motors under water. The same inventors came up with the idea of the torpedo at the same time, making the new submarine a very unique war tool.