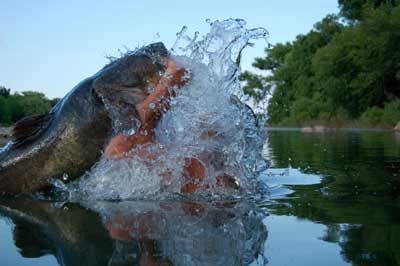 When catfish are this big, it's easy to see why you might drown trying to drag one to the surface.
Okie Noodling 2

Noodling isn't relaxing fishing. It's actually quite dangerous, which is part of its draw. You'll need to be good swimmer to noodle, even in shallow water. Some fishermen dare to noodle in water that is waist to chin deep. Catfish are very strong, especially when they're fighting for their lives, and they can easily pull a person underwater. Many an old-timer has a story about someone who died because he couldn't get his hand loose from the catfish's jaw and was dragged to the bottom of the river [source: Bilger].

Every noodler will tell you that it's unsafe to noodle alone. Any handfisher needs a companion to help subdue a fish, extract his or her hand from a fish's maw or pull him or her out by the feet when trouble strikes underwater.

Earlier, we talked about the fact that once a catfish latches onto your hand, it's likely to spin around, ripping up your skin with its sandpaper-like teeth. Some noodlers wear gloves to protect themselves. But others eschew gloves because they can be a completely different kind of dangerous. Gloves may snag on a catfish's tooth or a stray branch and trap a noodler underwater. Most noodlers don't wear sleeved shirts for the same reason. Many handfishers would rather lose a little skin than risk drowning. Another reason not to wear gloves? It takes away the sense of touch necessary to differentiate a catfish from, say, a snapping turtle. A catfish feels smooth and slick. A turtle feels like rock. If you feel fur, you're probably touching a beaver or a muskrat. Our advice? Get outta there.

Sometimes what you think is a catfish hole is really home to a completely different creature. You probably won't hear about a noodler losing a finger to a catfish. But you'll hear tons of stories about digits lost to beavers or snapping turtles. The same habitats that attract catfish to lay their eggs also attract animals like muskrats, turtles, beavers and poisonous snakes. Obviously, you don't want to disturb any of these guys. Champion noodler Lee McFarlin told ESPN he'd once searched a lake for the missing body of a fellow noodler. When found, the man's body had bite marks to the skull -- the result of disturbing a beaver several feet underwater [source: Eifling].

The pure strength of a startled catfish presents a risk of injury. If you don't get a good grip on the fish you're chasing, chances are it will rocket out of its hole and straight into you, which could knock the wind out of you or even break a few ribs. Catfish also have barbs on their pectoral fins that can sting or slice your skin as the fish speeds by [source: Sutton].

If we've whetted your appetite for adventure sports, visit the links below for more outdoors excitement.

We won't delve into the morality of hunting and fishing, but we'll tell you that noodling isn't without controversy. Conservationists have expressed concern that when catfish are pulled from their nests, it leaves no chance for eggs to develop and hatch. They also believe that even when fishermen return the fish to the water, it usually suffers so much physical damage during capture that it dies [source: Mulligan]. But there's no scientific proof right now to show that noodling has an adverse effect on the catfish population [source: Hall].