Noodling for Sport and Prizes 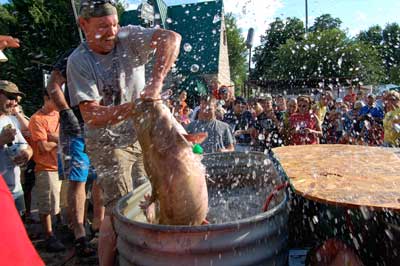 Catfish aren't petite, as you can see from this photo. And, you never know what you're going to get in muddy water.
Okie Noodling 2

The biggest North American handfishing tournament is the Okie Noodling Tournament, held each July at Bob's Pig Shop in Pauls Valley, Okla. Brad Beesley, a filmmaker, founded the tournament in 2001 to create exciting footage for his noodling documentary "Okie Noodling." The tournament quickly gained popularity and grew from 37 entrants the first year to 125 entrants in 2008 [source: Russow]. More than a thousand spectators attend these events to gawk at the gigantic catfish noodlers pull in. The tournament offers cash and prizes worth more than $2000, with the biggest prize going to the biggest catch of the day.

The rules are simple. All noodlers in the tournament must obey Oklahoma wildlife regulations. Each contestant is allowed three flathead catfish, all of which must be caught in Oklahoma. Contestants must catch their fish within 24 hours of the start of the contest, and the fish must be alive at the time of judging [source: Okie Noodling]. The tournament awards prizes for the biggest fish and the biggest stringer, the combined weight of all three fish. So far, the largest fish caught during the tournament was 60.2 pounds (27.3 kilograms), and was noodled by Chad Lamb in 2007 [source: PaulsValley.com]. The Okie Noodling contest has separate categories for "natural" and "scuba" noodling. Scuba noodling is just like it sounds -- noodlers wears scuba gear and chase bigger catfish in deeper water.

Weigh-in is at 7:30 p.m. the Saturday of the contest. So rules permit entrants to begin searching for catfish at 7:30 p.m. Friday evening. Contestants in the Okie Noodling Tournament get an early start to secure the best fishing spot. In fact, noodlers will drive around all day looking for an undiscovered location. They're expected to stick to a gentlemen's agreement regarding fishing holes -- don't poke around in a spot where another group is already working [source: Eifling].

Before final weighing and judging, the catfish swim around in large tubs, and spectators take photos with them. What happens to the fish after the contest is over? Each noodler decides the fate of his catch. A lucky few catfish return home to the lake or river where they were caught. The rest are cleaned, battered and fried.

The Okie Noodling Tournament is certainly the first of its kind -- in North America, anyway. But since 1934, the Argungu Fishing Festival in Nigeria has attracted thousands of fishermen each year. The contest is one hour long and takes place in the Argungu River. Contestants do handfish, but rules allow them to drag nets along the bottom as well. In 2008, the winning fish was 140 pounds (63 kilograms). Unfortunately, a few days later, the winning fisherman, Bello Yakub, was arrested when judges realized he had actually brought a dead fish from another river [source: BBC].

Where did the name "noodling" come from?

Nobody's certain how the word "noodling" came to describe handfishing for catfish. One guess is that wrestling with a slippery, squirming fish is like trying to grasp a wet noodle. Another is that the way the fisherman wiggles his or her fingers to lure the catfish is like wet spaghetti. According to the dictionary, the word "noodle" means simpleton. But we're sure that's just a coincidence.