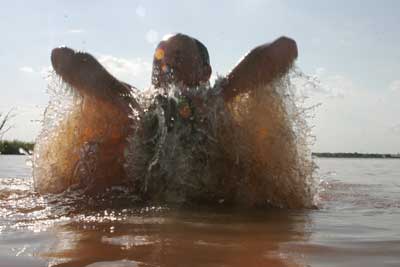 A noodler surfaces with a catfish.
Okie Noodling 2

Most noodling takes place in shallow water. If the water is over your head, it can be difficult or even impossible to wrestle a fish to the surface. Noodlers search for likely catfish hideouts -- inside submerged logs, fallen trees, under rocks or in mud banks. Catfish make their nests where they feel safe. During spawning season, which occurs in spring and summer when the water temperature rises to about 70 degrees Fahrenheit (21 degrees Celsius), you're likely to find catfish in their nests because they seldom abandon their eggs.

Once you locate a promising spot, you'll want to barricade any possible escape routes, using rocks, sandbags or your noodling buddies. Next, test the hole by poking it with a stick. Experienced noodlers can feel the difference between a catfish, a snake or a turtle. If your stick says it's a catfish, go ahead and jam your hand in the hole. Sometimes you can do this without putting your head underwater. But sometimes you'll have to take a deep breath and submerge yourself. You'll need your noodling buddies to act as spotters, in case trouble strikes.

If you're lucky, a catfish will swim out and, in an attempt to defend its nest or escape, will bite you. Some catfish may just nip at your fingers, but others will clamp onto your entire hand. Although catfish don't have super-sharp teeth, those teeth are plentiful. They curve inward, and noodlers say they feel like coarse sandpaper. The sandpaper feeling alone might not be so bad. But after a catfish clamps down on something, it tends to spin, which can rub your skin raw [source: Bilger].

If the fish doesn't clench your hand, you'll need to pull open its mouth to get a good grip. Then, wiggle your fingers to work them into the fish's gill cover, the respiratory area on the sides of the fish's head. Grabbing it by the gills makes it more difficult for the fish to bite you during a struggle. It also helps you hold on a bit tighter. Once you get a firm hold on the fish, pull that prize to the surface. A flathead catfish could weigh anywhere from 20 to 50 pounds (9 to 22.7 kilograms) or more, so this is no small task [source: FWC].

Here's where your spotters come in: If the fish drags you under, they'll pull you out. Once you get your fish to the surface, they'll pull it off your hand and throw it in the boat, thread it onto a rope, or let it go. Whether you keep the fish depends on the regulations in your particular state. In Missouri, for example, you must throw back any fish under 22 inches (55.8 centimeters), and you may only catch five catfish per day [source: AP].

Some noodlers use a small hook instead of a hand to grab the fish, a practice fishermen call gaffing. It's against regulations in most states where handfishing is legal because it violates the spirit of "hands only" fishing [source: Okie Fish].

In 1989, Jerry Rider, a handfishing champion from Oklahoma, appeared on the "Late Show with David Letterman" and demonstrated his noodling skills by catching a catfish in a tank. In 2001, Bradley Beesley's documentary "Okie Noodling" brought the subculture to the surface. The film spawned a popular noodling tournament as well as a sequel. Today, there's even a DVD series called "Girls Gone Grabblin'," which features women participating in the sport of noodling.