Inside a Life Jacket 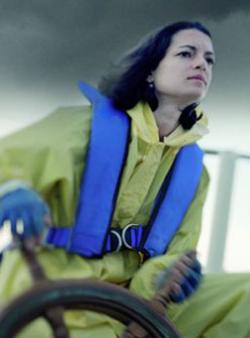 The outer shell of a life jacket is usually made of nylon or vinyl with material that keeps the life jacket afloat sewn inside. There are three classifications for the substance inside a life jacket: inherently buoyant, inflatable and hybrid.

Historically, cork, balsa wood and kapok (a naturally buoyant material from a tropical tree that's also used in mattresses and insulation) have been used in inherently buoyant life jackets, but today, the most commonly used materials are plastic foams, such as polyvinyl chloride and polyethylene.

Life jackets with foam are classified as inherently buoyant because a person does not need to do anything to activate the flotation. These foams use closed cells that trap air in pockets when the jacket is submerged.

Life jackets can also be classified as inflatable. These life jackets have cartridges of carbon dioxide gas sewn into them. When activated, the gas will release and fill the chambers of the jacket.

Some models will activate the release of gas automatically when the jacket is submerged, thanks to a small dissolvable stopper, like a bobbin or a pill. These devices are made of a water-soluble material, and when they dissolve, the gas is released and inflates the jacket. Other inflatable models require the wearer to pull a tab to activate inflation. When the user pulls the tab, it pierces the carbon dioxide canisters to release the gas. Both of these inflatable devices include tubes that a person can blow into, providing a backup way to inflate the jacket.

Hybrid life jackets are a mix of natural buoyancy and manual inflation. Inherently buoyant, inflatable and hybrid life jackets all work the same way, though. No matter how the trapped air gets in there, it weighs much less than the weight of the displaced water, and holds the person in the life jacket afloat.

There are more choices to make, though, in determining what kind of life jacket to wear. We'll take a look at the different categories of flotation devices in the next section.

In the 1930s, actress Mae West was known for her irreverent, risqué humor, as well as for her voluptuous figure. In tribute to her curves, Allied troops in World War II named their inflatable life preservers "Mae Wests." The Mae West serves as the basis for some of today's life jackets. The honor earned Mae West a place in Webster's dictionary.