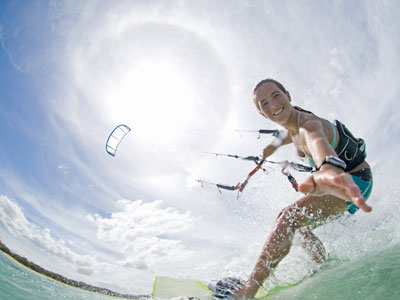 A young woman kiteboards under the sun.
Darryl Leniuk/Getty Images

To understand the physics of kitesurfing, you first have to understand how a kite works and some basic principles of aerodynamics. A kite flies, in accordance with Newton's laws of motion, as a result of the forces being applied to it. Since a kite is heavier than air, it needs the motion of the wind to generate the aerodynamic forces of lift and drag. The movement of the air flowing past the kite creates drag, while the lift is the movement perpendicular to the wind. The interaction of these forces determines how well the kite will fly. The ratio of lift to drag and the stability of the kite are tied to the length of the line; that is, the more line is released, the more drag is created.

To launch a kite, you need to create a lift force that is greater than the weight of the kite. The lifting force of a kite is created by the deflection of air downward; the change in the kite's momentum produces an upward force because the air traveling over the top of the kite is going faster than the air that's passing underneath. This fast-moving air produces less pressure, and because there's less pressure beneath the kite, it's forced upward.

The velocity of the air blowing at the kite is the most important factor in determining the size of the lift. If you face the kite with the wind at your back, the wind provides relative velocity to lift the kite. Standing still, a kite will usually fly without much additional motion on your part because wind velocity increases with altitude. In general, a wind speed of 10 to 18 knots is ideal for practicing kitesurfing.

Once a kite is launched, it will remain at an altitude in which all of the forces are balanced. If you pull on the kite's line, you can increase the velocity of the kite and thus increase its lift. This is how movement is achieved in kitesurfing. By using your weight to pull the kite, you increase the speed at which the kite moves.

In order to increase or decrease your speed while kitesurfing, you have to change the position of the kite. When the kite is overhead, it's in the neutral position and not providing any pulling force. When the kite is toward the water in front of the body, an area called the power zone, the wind blowing horizontally catches the kite, and pulling force is created. When the kite is in the power zone, three degrees of power can be achieved. For minimum power, lower your kite and hold it in a constant position. For medium power, steer deeper toward the horizon and turn back and upward repeatedly. For maximum power, steer even deeper.

Now that you know the physics of kitesurfing, let's take a look at how to launch your kite and some tricks and jumps you can perform on the water.