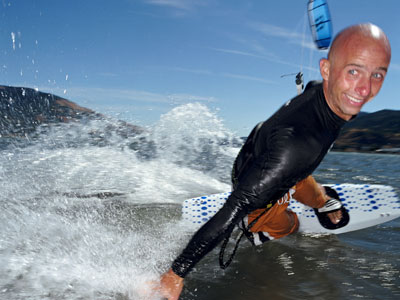 Kitesurfing, a hybrid of kiting, windsurfing and wakeboarding, allows you to harness the power of both the wind and the ocean to travel at record speeds and jump to astonishing heights in the air. Kitesurfers glide across the top of the waves on a board that's similar in size and shape to a wakeboard while holding onto a kitesurfing kite. The basic objective of kitesurfing is to do tricks and to see how high and long you can jump off waves.

Although kitesurfing might seem like the latest extreme sport fad, we can actually trace its roots to 13th century China. Rather than an activity for adventurous water sport enthusiasts, kitesailing, as kitesurfing was originally termed, served as a mode of transportation. The 13th century Chinese used sails to harness the wind and increase the speed and stability of their canoes as they glided across the water.

The basic design of the kite didn't change much for about five centuries. However, in the 1800s, British innovator George Pocock revolutionized the use of the kite to move vehicles on land and sea. Pocock increased the size of the kite, using it as a sail to guide carts on land and ships on water. He introduced the four-line setup that's still used today. This allowed boats and carts to turn and sail upwind. In 1903, Samuel Cody took Pocock's development to a whole new level; his man-lifting kites were able to cross the English channel.

The mechanics of kitesurfing were used mostly for these utilitarian purposes until the 1970s and 80s when kitesurfing began to take off as a popular extreme sport. Many companies began to market water-launch kites, and the sport was popularized by extreme sports enthusiasts off the coast of Maui. It's now one of the fastest growing extreme sports. As of 2006, there were 210,000 kitesurfers worldwide and 114,465 kites sold. In the United States and Canada, there were 39,600 kitesurfers and 23,608 kites sold. And industry analysts projected growth of kitesurfing participation at 35 to 50 percent [source: Bryja].

Now that you know about the background of kitesurfing, you're ready to get your surf on. On the next page, we'll take a look at what equipment you need to kitesurf.