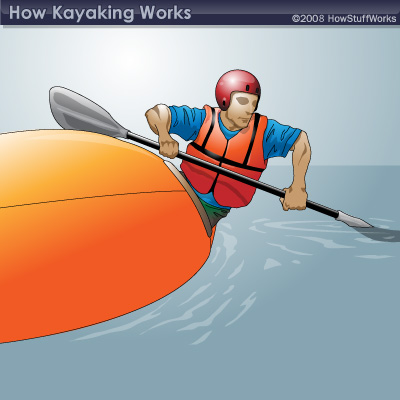 If you've never been in a kayak, it might feel pretty unstable at first, and the paddle itself may frustrate you. Just getting the boat to go straight is a little tricky, so taking a beginner's class is a great way to get moving in the right direction.

It's best to start out in a calm lake to get the basic strokes down. Once you're in the water, pick out an object on shore and try to paddle toward it. You'll most likely find yourself zigzagging or going in circles at first. Keep your strokes short and close to the kayak -- the farther out the blade is, the more you'll turn. For a basic forward stroke:

Once you're moving in a straight line, you need to learn how to turn. One way is to use the paddle blade as a rudder. Drag the blade behind you in the water, close to the boat. The sharper the angle from your forward position, the more the boat will turn. The kayak will turn toward the same side as the blade. So if you want to go left, drag it on the left. Practice moving toward an object on shore and you'll get used to how long you need to rudder to correct your path.

This rudder action will slow the kayak down, so you should also work on a steering stroke to keep the boat moving forward. The forward sweep stroke is similar to the regular forward stroke. Put the blade in near your feet, but instead of paddling straight back, arc the stroke out more and bring it further back toward the rear of the kayak. The harder the stroke, the more you'll turn. Again, practice this stroke until you get a good feel for it.

Another widely used stroke is the low brace. This is used to avoid capsizing when you feel the kayak beginning to tip:

These are just a few of the basic strokes. It's impossible to learn all you need to know by reading about it -- the only way to really get the hang of it is to try it out in the water. Touring kayaks are much easier to master than white-water boats. Never attempt to white-water kayak unless you've taken lessons and go with an experienced boater.

In the next section, we'll look at the history behind kayaking.

Depending on what kind of kayaking you want to do, there are hundreds of great locales to suit your fancy. For sea kayaking, you probably won't find a better destination than Hawaii. Much of Hawaii's coastline is only accessible by kayak. The clear, warm waters draw paddlers from all over the world. Then there's the backdrop -- beautiful coral reefs, volcanoes, tropical vegetation and mountains make it a touring kayaker's paradise.

If white water is your thing, the world is your playground. From Panama to Patagonia, Arizona to Zimbabwe, anywhere there's a flowing river, you'll find kayakers. The United States has plenty of options all over the country. Colorado, Utah, California and Nevada are all choice states for kayakers, but one of the top 10 rivers in the world is the Gauley River in West Virginia. On the Gauley, you can navigate more than 100 major rapids over the course of 26 miles. Check your calendar before you go though -- the opening of the Summersville Dam creates this paddler's playground only once a year for 22 days [source: narr.com].