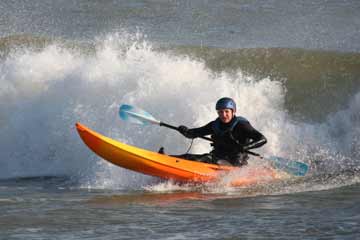 If you're looking to expand your water sport repertoire, kayak surfing could be just the right thing. This quickly growing sport is basically like traditional board surfing, except instead of riding the waves on a board, you maneuver through the surf with a kayak.

Kayak surfing is a relatively recent sporting invention. Although as a sporting activity, kayak surfing dates back to the 1920s, the first competitions occurred in the 1960s in Great Britain. During the 1980s, the sport began to pick up in Great Britain and the United States [source: Adventure Sports Unlimited].

Kayak surfing is similar to whitewater kayaking, so it uses vessels that are very similar to small whitewater kayaks. But surf kayaks are often made of fiberglass instead of plastic, and they tend to be curved at the nose and flat at the back [source: Beman]. The surf kayak's design allows it to reach high speeds, but you don't need big, fast waves to take up the sport. Even smaller surf, such as that found on the eastern coast of the United States, is suitable for kayak surfing.

Kayak surfers have two choices for kayak type: sit-on-top kayaks, which are often used in warmer water, and sit-in kayaks. In both types, the kayaker needs to be attached to the boat. The paddler in the sit-in style is attached by the spray skirt (a waterproof piece worn around the waist to form a seal at the boat's opening), and the paddler in the sit-on-top style must strap him or herself with high braces that allow the paddler to control the boat. For safety reasons, you generally shouldn't use regular recreational kayaks to kayak surf. Instead you should use only sit-on-top kayaks designed for the ocean or certain whitewater kayaks with special spray skirts. In addition, you'll also need double-sided kayak paddles to steer yourself through the waves.

Although kayak surfing doesn't yet have the universal popularity of regular outdoor activities such as kayaking or surfing, it is a quickly growing water sport. One reason that it may not be as popular as other water sports is that surfers sometimes guard their turf pretty intensely, and they can sometimes view kayakers as invading their territory [sources: Nieves]. Also, many people regard the sport as dangerous. When you're surfing, you can bail from your board pretty easily, but ditching a kayak while strapped to it can be more difficult. We'll look at safety measures later on to determine what the dangers are and how to prevent them.

We'll also examine some kayak surfing techniques, tips and safety precautions. But before we get into the practice of kayak surfing, we'll first take a look at the basic physics principles behind it.

The Physics of Kayak Surfing

In order to understand how to best maneuver your vessel while kayak surfing, it's helpful to know a little about the basic physics of the sport. The same principles that underlie surfing also apply to kayak surfing. The following concepts of physics all come into play when kayak surfing:

Newton's laws of motion explain how matter moves, and they can help you understand how to maneuver your kayak and stay afloat. For example, Newton's third law states that for every action there is an equal and opposite reaction. So, when you lean your kayak into the water, the water will push back up against the kayak. This principle is one of the reasons for your ability to turn your kayak.

Both you and your kayak have a center of gravity that can be shifted to change the direction of the kayak. For example, if you move your weight to the back of the kayak, the front end will lift up in the water. While gravity pulls the kayak and helps you stay steady as you move, buoyancy keeps you and your kayak afloat. If you're sitting in the kayak, your weight acts as the center of gravity, pulling the kayak down until the push of the water below balances out to keep you afloat.

Hydrodynamic forces, such as lift and drag, can influence the size and shape of waves and also change the movement of your kayak. Wind speed, fetch (the distance of open water that the wind needs to blow over) and the length of time the wind blows over an area can affect the size of waves. As a result of these conditions, three different types of waves develop: ripples, seas and swells. Ripples are small waves; seas are larger, longer lasting waves with irregular movements; and swells are more stable waves formed by stable wind systems.

On the next page, we'll see how you can use these principles of physics in your kayak surfing techniques. 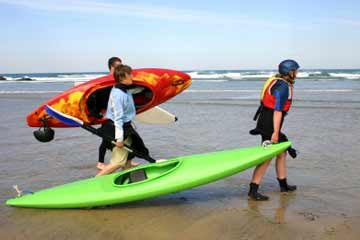 Before hitting the ocean, you should stand back and observe the pattern of the waves to get an idea of how fast they're going and how much time is between them.
©iStockphoto.com/Rey Rojo

Here's a step-by-step process for how to best kayak surf:

Take a look at the waves from the shore and come up with a game plan. See if there's enough lull time to paddle out to the waves, and look to where the waves are breaking. Then, you can decide when and where to enter the ocean.

Board your kayak where the surf hits the shore so that your kayak doesn't move much along the coastline. Once you're ready to set out, use your arms to push your kayak into the water. Paddle to the part of the ocean where you want to ride the waves. To get to the swells, you might have to paddle over or through some waves -- make sure the waves don't break on you. If you think a wave is about to break on you, you should turn away, paddle over it or just ride the wave in.

As the swells start to build, begin paddling to shore to catch the wave. Ideally, you'll want to go only fast enough to keep up with the wave. If you go too slowly, the wave will pass you; however, if you paddle too fast, you'll be too far ahead of the wave and miss it.

When you see a wave that suits your requirements for speed and volume, you can position yourself on top right facing shore before it begins to break. You'll drop into the pocket of the wave where it is steepest and fastest. Here, you'll be able to practice the most moves and maneuvers.

Once you've caught a wave, lean forward and paddle to ride it either straight into shore or slightly angled in the same direction the wave is breaking. If the wave is very steep, it could cause the bow, or front, of the kayak to dip too deeply into the ocean, which could cause you to capsize. To avoid this scenario, lean backward so that your weight is toward the wave [source: Beman].

When landing your kayak, you might be able to ride a wave all the way to the shore if you are a seasoned wave rider and the beach is free of swimmers and other riders. However, if you can't ride into the beach, you can do a controlled surf landing, in which you paddle backward to avoid catching a wave as it approaches, then paddle forward to chase it toward the shore. This will slow your landing and allow you to control where you go and how fast you get there [source: Foster].

On the next page, we'll learn about some kayak surfing tips.

When first starting out with kayak surfing, you might consider starting with a two-person sit-on-top kayak. Having two people will give you more paddling speed, and sit-on-top kayaks are easier to roll out of in the event of capsizing. Once you get some experience under your belt, you can move on to a single-seater surf kayak.

Once you're ready to go with the optimal kayak for your own personal needs, the next item to study up on is the waves themselves. It's a good idea to time the waves before you enter the ocean so that you can have an idea of what to expect once you've launched. Count the intervals between waves. Remember that the smaller the interval, the less time you'll have between waves. In general, long periods of swell usually are accompanied by long periods of reduced waves. Short periods of swell are usually more constant. You should start on small surf, and then work your way up to larger surf gradually as you gain more experience.

One problem with kayaks is that they have so much speed compared with surfboards that they can catch waves farther away from a pocket. So, sometimes board surfers will be in the pocket moving toward the kayak surfer on the same wave. If this happens, the kayak surfer is expected to abandon the wave and give the board surfer the right of way [source: Bay Area Sea Kayakers].

Up next, learn about other safety techniques to prevent collision with fellow surfers and what to do should your kayak suddenly capsize. 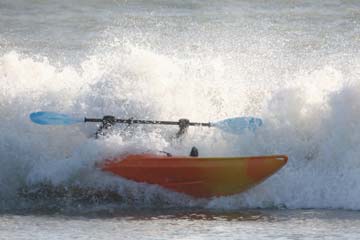 Wearing a helmet protects your head if a wave crashes over you and pushes you toward the sand below.
©iStockphoto.com/Joe Gough

Although kayak surfing can be an exhilarating new sport for an outdoor enthusiast, like any water sport, it can also be a little dangerous if you don't keep in mind some necessary safety precautions. One of the biggest issues with kayak surfing is the less-than-desirable scenario of capsizing while attached to the kayak. This is particularly a problem for sit-in kayaks. To avoid becoming trapped, you'll need to roll your vessel back over. Swimming out of your vessel might not be a viable option once you're out at sea, so you'll need to roll to get upright again. Rolling may involve techniques such as pulling for the surface with your paddle or using a push-and-pull maneuver known as the hip flick to allow the buoyancy force to help you get upright [source: Sea Kayak Chesapeake Bay]. You should practice a few times with a partner before attempting this maneuver on the waves.

In addition to practicing your rolls, you'll also want to wear a helmet. Board surfers don't wear helmets because they can bail a little more freely, but helmets are definitely necessary for kayak surfers who run the risk of knocking their head on the bottom of the sea while still attached to their kayak. In addition to a helmet, you should also wear a personal floatation device, regardless of the strength of your swimming skills.

Before you head out, survey the waves. If the waves look too rough, don't attempt to kayak surf. Based on your own ability level, you should make a good judgment about whether you can handle the waves.

Once you're in the water, you'll want to be mindful of how close you are to other kayak surfers or boarders. Surfers can more easily maneuver their boards to make tight turns, but it's more difficult for kayak surfers to get out of the way.

Remember that just because you are able to catch a wave doesn't mean you have to. Kayak surfers can usually catch waves more quickly because of the speed of their paddling, and therefore can usually get to waves before board surfers. So, be sure to be generous and share the waves. When in doubt, be courteous to your fellow wave riders and give them the right-of-way.

Learn more techniques and tips for kayak surfing by following the links on the next page.