Are foot-powered kayaks the next big thing?

Browse the article Are foot-powered kayaks the next big thing? 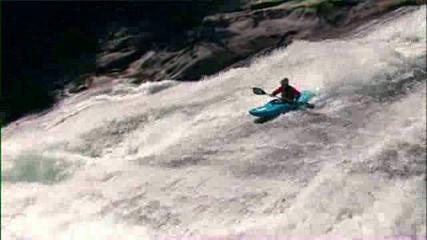 Tao Berman is a three-time world record holder in white-water kayaking. This thrill-seeker talks to Bear Grylls about how confidence helped him survive a 98-foot waterfall drop.
Discovery

When most of us think about kayaking, we picture a small, simple craft, powered by oars and easily flipped over. It's the classic outdoorsy image of cutting across a lake or calm river without the smell of gasoline or anything getting between you and nature, or paddling down rapids with just your wits and sense of balance to protect you. Of course, things have moved along in the hundreds of years since kayaks came into use -- materials and production techniques -- but for a lot of us, it's that purist image of kayaking that remains.

One of the biggest innovations of the past several years, and one that's gaining popularity, is the pedal-powered kayak. The old image of the self-contained, legs-inside kayak has passed on in favor of variety -- including the sit-on-top kayak (SOT), where your feet and legs are outside the boat -- and this newest idea, the foot-powered kayak, has taken its place in the canon.

But what is a foot-powered kayak all about? What are the advantages, the drawbacks, the differences between paddle and pedal?

The Basics of Foot-powered Kayaking 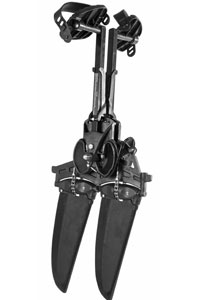 This is Hobie's Mirage Drive, which propels their foot-pedaled kayak models.
Image courtesy of Hobie

What's obvious on reflection, if not immediately, is that foot-powered kayaks use an entirely different muscle group to power them than traditional kayaks do. Most of the differences between the pedal and paddle experiences arise from this clear difference, but some of the complexities may surprise you.

Foot-powered kayaks are moved through the water, to put it simply, by transferring the movement of your feet and legs to fins -- also called sails -- beneath the vessel. Your lower limbs are doing the rowing in this case, and usually replicating the classic oar-stroke of a paddle in order to do it. If you think about it in terms of physics, you're just using a simple machine to transfer one movement -- pedaling -- back into the original form, paddling.

Advocates of foot-powered kayaks will point out that you already use your feet and legs for locomotion -- and most people don't use their arms this way -- and contain larger, stronger muscle groups intended for that purpose. But that's not the whole story, either. Imagine bicycling, for example: You use your legs to pump the pedals, just as with a foot-powered kayak, but you're only working against gravity in that case. The force you're expending goes downward, for the back half of each revolution, raising your body at the same time you're pushing down the pedal.

Not so with a foot-powered kayak. To power the pedals in this recumbent position, you're pushing backwards, not down. While there are ergonomic benefits here -- less downward pressure on joints and feet means less stress on them -- you're also bringing your lower back into the mix, as it presses back against your seat. This, some say, can result in repetitive-stress and sciatic complications due to the different movements involved.

Balance and Fishing In a Foot-powered Kayak 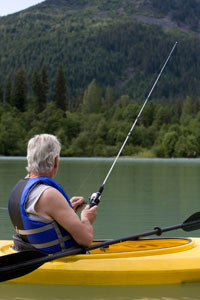 In a classic, legs-inside kayak, you keep your balance in the fluid motion of the paddling. We've all seen video or images of the classic "kayak flip," where the kayaker's whole body goes under the kayak and comes up (hopefully) on the other side, back in balance. The simplicity of this fusion of craft and body is a main reason kayaks have been so popular for so long.

When you move to a SOT type of craft, you're involving more of your core to stay upright -- and with a foot-powered kayak, you're even further away from that natural center of balance. That's good for burning calories, of course, but represents a major difference in practical use than we might notice at first.

This comes into play with fishing, especially, as one of the best things about foot-powered kayaks is the fact that, without paddles, your hands are supposed to be free. But in practice, at least before you become an expert in using your kayak, you're going to end up holding on for dear life. Combine that with the need for a rudder -- since you can't adjust your trajectory by simply using the paddles -- and you've got one hand on the boat and one hand on the rudder much of the time.

Changes to the length, width and body shape of the kayak are a necessary change here, but this in turn changes the speed and maneuverability of your craft. And if you do tip over, it's a lot harder to get yourself upright and/or out of the water.

The Question of Speed

Are pedaled kayaks faster? Most users agree that, because of the sheer difference in muscle power involved, you're going to get a better speed. But that's still assuming all other things are equal. Because a foot-powered kayak includes a drive mechanism beneath the boat, it's a lot harder to navigate in shallow or vegetation-choked waters, because your actual boat size and shape extend further down. And you'll need to bring an oar with you regardless of your methods, just in case.

Likewise, even a rudder can't adjust your direction as easily or quickly as a simple oar maneuver. Speed on a straightaway is one thing, but nature isn't built in straight lines.

Still, anglers and tour-boaters alike can find a lot of use in a foot-powered kayak. While it's still not very likely you'll be able to stand and fish, as with a larger raft or speedboat, it's more possible to find a quiet spot and take your hands off the rudder when fishing is your aim. The larger inside space, depending on your model's build, can give you more room for fishing supplies than a classic kayak, which could extend your trip without introducing any other hardships.

If you're willing to put in the time and practice, and shoulder the extra expense that comes with a more complex machine, you could find that a foot-powered kayak suits your needs better than the simpler models -- or even opens up outdoor opportunities you never would have imagined.

Although river sports are a big part of outdoor life here in Austin, I'm not too familiar with kayaking. You tend to think of it as a classic activity, and I was surprised to know that any innovation, beyond things like materials and boat design, was really catching on. But once I learned more about it, I found the possibilities more and more intriguing.