Who was the first scuba diver? 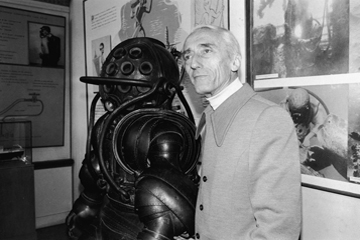 Determining who the first scuba diver was kind of depends on whom you ask. Many diving historians point to an Englishman named William James, who in 1825 invented what is commonly agreed to be the first open-circuit scuba system. Open-circuit means that the air you take in is vented into the water, as opposed to being "re-breathed" by the diver. Like Augustus Siebe's diving dress, James used a heavy copper helmet attached to a waterproof suit. Air was compressed into a metal container around the diver's waist and fed into the mask and regulated by hand.

Others say that Henry Fleuss deserves the recognition as he was awarded the first patent for a re-breather in 1878. His scuba set allowed a diver to stay submerged for up to 3 hours and it was successfully used by diver Alexander Lambert in 1880 for an underwater construction project.

If you want to go back even further, in 1771 a man named Doctor Freminet invented the first self-contained diving system, named the Machine Hydrostatergatique. He was allegedly successful in diving to a depth of about 50 feet (15 meters) for several minutes at a time, with a copper air tank on his back that was fed into his copper helmet. By the strictest definition, this would make Ferminet the first scuba diver. Unfortunately, while he gets his due in history books, most scuba enthusiasts don't consider him to be first, as his system was so different from what we would come to think of as scuba.

Still others say that Charles Condert invented the first scuba system in 1828, based on suspicions that William James' scuba system, while patented, was never actually built and used in the water. Condert's system was based on the Deane brothers' diving dress and James' published patent, and he managed to make several dives into the East River of New York to depths of about 20 feet (6 meters). Ask another diving historian and he or she may say that all of these systems, while valuable for being a part of the history of diving, don't qualify. He or she will make an argument that famous French diver Jacques Cousteau and his partner Emile Gagnan were the first true scuba divers because of their invention and perfection of the Aqua-Lung -- the same system used by divers today.

Even though it may be impossible to know who the very first person to scuba dive was, each of these inventors developed key innovations that made modern scuba diving a reality.