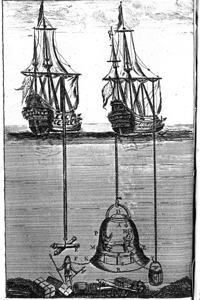 The first real innovation to the diving bell came when Frenchman Denis Papin figured out how to get fresh air into them in 1689. Flexible hoses attached to bellows ran into the water and up inside the bell, providing fresh, breathable air. While this helped divers stay submerged longer, it did nothing to combat the pressure and to allow for deeper dives. The next obstacle was to figure out how to get pressurized air into the bell, something Englishman Edmund Halley did just a year later.

Halley attached weighted wooden barrels to the diving bell. At the bottom of each was a hole in the side that allowed water to come in, forcing the air up. At the top, a hose ran from the barrel and led to the bottom side of the bell, where it was attached with a faucet head. The divers inside could simply turn the faucet to allow the fresh air to flow in. The barrels were alternately pulled to the surface for "refilling," and dropped back in again. By being able to control the amount of air in the bell, the divers were able to match the pressure of the displaced water. Halley's innovation made the pressure of the interior of the bell equal to that of the surrounding water.

Things went on like this for a while, until English scientist John Smeaton invented the diving air pump in 1788. The surface pump was attached to the roof of the bell and operated by four men. In the end, it was, in concept, much like Denis Papin's original plan 100 years earlier. Using this new technology, workers were able to descend in a diving bell and repair the foundation of the Hexham Bridge in England. Smeaton also was one of the first to make the bells square, calling them "diving chests."

Other improvements over the years included adding electric lighting inside, thick convex lenses as windows, and increasing the interior space so that as many as 12 men could descend at a time. The earliest applications of the bells were to transport workers under water so that they could repair or build docks, lighthouse foundations and bridges. Early enthusiasts also tried their hand at deep shipwreck salvage, something the bells are still used for today.