Breathing in Caves and Decompression 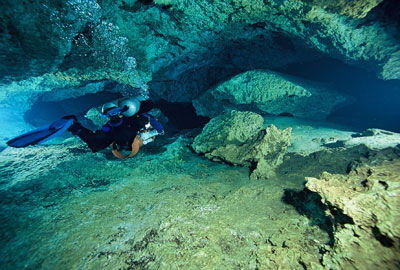 Cave divers need to move through the water very carefully if they want to avoid "the bends."
Photo courtesy Darren Tedder

To understand the dangers of diving at high pressures underwater, it's best to look at a soda bottle. When you shake a soda bottle, some bubbles go up to the surface. It doesn't look like much at first, but if you quickly open up the cap, there's a burst of fizzy gas as bubbles continue to climb up toward the surface.

There's a way to keep this from happening and making a mess. If you've dropped a bottle of soda on the ground, you can prevent it from bubbling up and creating too much pressure by opening the cap very slowly. If the gas inside the bottle is gradually let out, a small amount of bubbles will form, and the pressure will be decreased.

Our bodies act very much like a shaken soda bottle when we're under high water pressure. We breathe about 78 percent nitrogen and 21 percent oxygen on land -- our bodies use the oxygen, but nitrogen is either discarded or dissolved into our blood and tissue without any harm. At lower depths, however, increased pressure from all the water on top of us causes nitrogen to form in our blood and tissue. If we go down and come up too fast, nitrogen is released from our bodies too quickly and creates bubbles in our blood, much like opening a bottle of soda too quickly. This causes a condition known as decompression sickness (DCS), or "the bends" -- mild cases can lead to a tingling sensation or joint pain, while more serious ones may cause heart attacks, strokes or ruptured blood vessels.

A diver can avoid getting the "the bends" by adhering to dive tables, which can be used to calculate how much time someone should spend at a certain depth before ascending. If a diver follows the dive tables correctly, nitrogen will slowly be released from the body without causing any damage.

Because of the unique circumstances that entail diving at high pressures, cave divers carry with them tanks filled with a variety of special gas mixtures. Compressed air, a mixture of about 78 percent nitrogen and 22 percent oxygen, is cheap and easily accessible, but not the most popular of choices -- too much nitrogen can lead to nitrogen narcosis, a condition similar to drunkenness or laughing gas that comes on suddenly and can cause divers to lose concentration and drown. Too much nitrogen can also lead to decompression sickness, as described above.

Another, more common mixture, called nitrox, puts more oxygen in a tank, roughly 32 to 36 percent oxygen. This decreases the chances of breathing in too much nitrogen, but too much oxygen at high-pressure depths is also dangerous and lead to oxygen toxicity, which causes sudden fatal seizures and can lead to drowning. Divers can avoid this condition by following very strict dive schedules.

There are also mixed-gas supplies available that offer alternative mixtures to air or nitrox. One of these is heliox, a mixture of 79 percent helium and 21 percent oxygen. Like the others, it has its strengths and weaknesses -- helium doesn't have the intoxicating effect that nitrogen does, but divers breathing heliox lose body heat six times faster than if they were breathing compressed air or nitrox, making them more susceptible to hypothermia.

To learn about some of the techniques cave divers use to move around, read the next page.