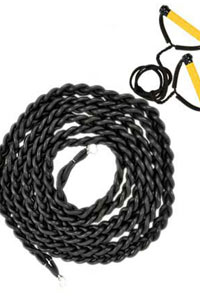 Think about it: When bungee boarding, you're basically turning yourself into a human slingshot and rocketing along at 30 miles per hour (48 kilometers per hour) on a thin slab of fiberglass or wood. Can that be dangerous? Absolutely.

Every year, 50,000 U.S. skateboarders end up in the emergency room and about 40 snowboarders are killed as a result of practicing their sport [source: MedicineNet.com, NSAA]. Sprains, bruises and fractures are common. Serious head injuries are also possible. While there aren't as many hard statistics available about bungee boarding accidents, the sport shares all the dangers that go with boarding sports in general, combined with the possibility of the bungee handle hitting a bystander.

The biggest factor in bungee boarding safely is probably experience. Roughly a third of injuries in a comparable sport -- skateboarding -- happen to those who've been at it less than a week [source: MedicineNet.com]. The more time you spend learning the basics, the less likely you may be to get hurt. Be sure to take plenty of practice runs with the bungee and get used to its dynamics before trying anything fancy.

Additionally, always wear a helmet while bungee boarding. Guards for knees, elbows and wrists are also available. In the water, a life vest is a good idea, too. As with other board sports, it's helpful to learn how to fall: Relax as much as you can, and try to land on flesh, not bone. Roll as you meet the ground [source: CPSC]. Local laws may ban activities like skateboarding in certain places or require a helmet to be worn [source: San Francisco Skateboarding Laws]. Make sure you know the regulations in your area and respect them.

Bungees rarely break. Each strand can withstand 900 pounds of force [source: Kalisek]. If one strand of your bungee does break, its braided design keeps the whole thing from giving way. Usually, backlash comes from the user letting go of the handle when it's stretched tightly (before a ride has taken place). Always make sure bystanders are far enough away -- in other words, nowhere near the anchor point -- before you get started.

Be careful at the beach. Spectators or swimmers can easily come within range of the bungee. Use an approved anchor, and check it frequently to make sure it's secure. If you're bungee boarding in the street or in a parking lot, make sure there's no traffic. Also, only one person should ride a board at a time, and you should never wrap a bungee cord around any part of a person's body.

For more information on bungee boarding and board sports in general, check out the links below.