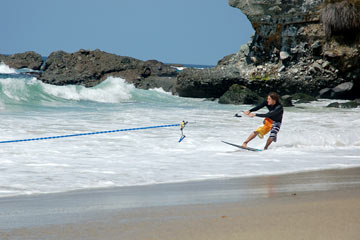 Board sport enthusiasts often face the problem of how to get up speed. Using hills and drop-in ramps is an obvious solution, but what if none are available? Some, like skateboarders, can rely on a running start, but the use of leg power alone may keep them from reaching their full speed potential. A riverboarder named Kevin Veon started tackling these acceleration issues in 2004 by experimenting with a braided rubber cord, and that's how bungee boarding was born.

It goes like this: You take a tough, 20-foot-long (6-meter-long) elastic cord. Tie one end to a tree beside a river, attach the other end to a small surfboard, and wade in. If you hold the board underwater, flat against the current, the pressure of the water pushes you downstream. When the cord has stretched as far as it will go, mount the board and angle it upward (in the direction from which you came) so that the current pushes it to the surface. With the force of the current greatly diminished, the stretched cord pulls the board -- and you with it -- back upstream at around 30 miles per hour (48 kilometers per hour). That's bungee boarding in a nutshell.

The sport evolved from a variation of riverboarding that's a traditional Idaho pastime. Veon knew that kids had long surfed the Boise River on plywood boards by simply tying a rope to a tree or bridge support and riding the current [source: Miller]. He added the bungee to give the sport another dimension.

From there, the idea grew. If it worked for riverboarding, which has only a handful of devotees, why not for skimboarding -- a beach sport similar to surfing -- which has a few more? And what about snowboarding or skateboarding, which each has many enthusiasts? Veon adapted the bungee to each sport and started a company that is now called Banshee Bungee to market the products [source: Banshee].

Banshee, which currently has the bungee boarding market to itself, sells a cord made of three vulcanized rubber tubes woven together. The bungee can stretch to nine times its length. When used on a river, the cord attaches directly to the board with a special hook that releases once the rider has reached maximum speed. For other applications, the rider holds a handle similar to those used for water skiing and lets go when he's ready. The bungee has opened new possibilities, and new thrills, for intrepid boarders -- even those who live in urban environments. Read on to learn more about the physical forces that make this sport possible. 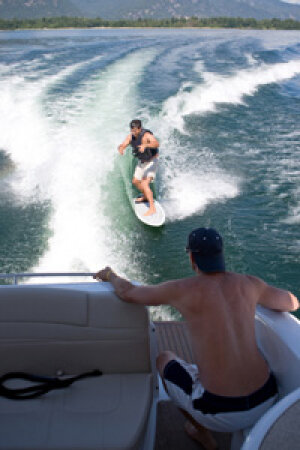 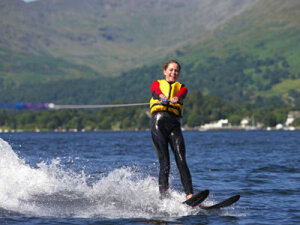