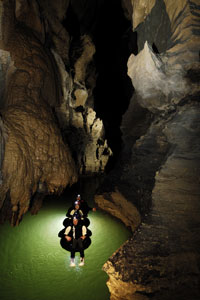 Beneath a canopy of glowworms (actually, they're not worms; they're the larvae of the Arachnocampa luminosainsect, or New Zealand fungus gnat), a line of inner tubers floats slowly along a river. They're about 150 feet (46 meters) below the surface, winding their way through a cave in Waitomo, New Zealand [source: Carlson].

A black water rafting journey through the Waitomo Glowworm Caves is one for the travel journals. Waitomo is home to the Legendary Black Water Rafting Co., which coined the term for the adventure and runs two trips out of Waitomo: the Black Abyss and the Black Labyrinth. Both involve inner tubing along the frigid Waitomo River in the dark, but the trips require different levels of physical fitness.

The Black Labyrinth is for beginners and requires only a base level of fitness and health. It's a three-hour cave tour both on foot and inner tube, and it has one short waterfall drop. The Black Abyss is a more advanced black water experience that includes a 110-foot (34-meter) rappel down to the cave floor and includes waterfall jumps, climbing, a 50-foot (15-meter) rush on a zip line, and squeezing through narrow cave formations over a five-hour adventure [source: Carlson]. The Abyss is really only for people who are in pretty good shape.

Black water rafting began in Waitomo, but it has spread a bit since it first came on the scene in the '80s. In Belize, it has become a very popular tourist attraction in such places as Footprint Cave near Belmopan, where cave-explorers float along the placid Caves Branch River, in total darkness save the faint glow from headlamps, and occasionally climb up onto the river's banks to check out Mayan artifacts.

It was on Caves Branch River that a passenger from a Carnival Cruise ship drowned in 2008, highlighting one of the most important things to remember about black water rafting, whether the trip is beginner or expert level: Cave tubing, while essentially a safe activity, does pose some risks.