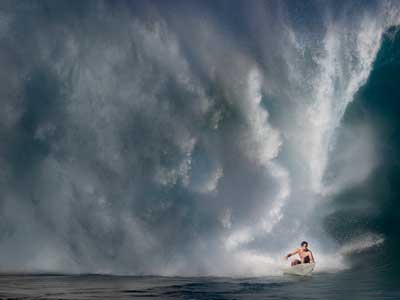 ­Surfing has been around for thousands of years, and it continues to grow in popularity as both a sport and a way of life. Originating among Polynesian fisherman who learned that riding the waves was an easy, quick way to arrive back on shore, surfing is now an international sport that attracts both hard-core, year-round surf devotees and vacationers just looking to have a few hours of fun in the sun. A distinct culture has developed around the surf lifestyle, and surfers seek out new places to chase the next big wave.

What makes a spot great for surfing? It's important to keep in mind that surfing is a year-long sport and not just summer activity. So, prime surf locations have good conditions during each season. But this doesn't mean it has to be warm and sunny out. In fact, winter weather patterns and tide movements often cause the biggest waves to break. For example, the temperature in Bundoran, Ireland­ is chilly even in the summer months, and the water can dip to frigid temperatures during the winter. But the huge swells of waves that crash here continue to attract adventurous surfers looking for a wild ride.

And sometimes the best surf spots aren't the ones that attract thousands of visitors; often, the best beaches for catching waves are known only to locals and surfing enthusiasts who will travel far and wide for the perfect wave. Surfers play their cards very close when it comes to hot surf spots. An onslaught of tourists could ruin the surf-style vibe and result in overcrowded conditions.

Where are the best spots to catch the biggest waves? Where can both beginners and pros alike enjoy the surfing spoils? 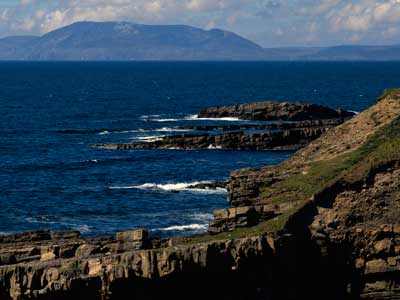 When you think of the West of Ireland, you're probably not thinking top surf spot -- small villages, pubs and fields of sheep are probably more likely to enter your imagination. However, in recent years, Bundoran and the western coast of Ireland has become a mecca for adventure-seeking surfers. In fact, Surfing Magazine recently named Ireland as an undiscovered "must surf" spot.

The geographical location of Ireland makes this area well-suited for huge waves. It's the first point of contact for storms in the ocean, and the rocky coast full of reefs and point breaks makes it perfect for big-wave surfers. In fact, low-pressure systems occurring in the winter cause waves as big as those found in Australia, Indonesia, or Hawaii. And, with Ireland's recent economic boom in the last 20 years, it's much easier for you to purchase surfing equipment there.

Bundoran is three hours from Dublin and is the surf capital of Ireland. While the huge, tow-in waves here attract experienced surfers, there also are plenty of beach breaks for beginners. Although waves swells can grow to enormous heights, the average waves are between 6 and 10 feet (1.8 and 3 meters). Tullan Strand consistently brings good waves for beginners, while at Streedagh, Rossnowlagh and Mullaghmore, waves suited for big-wave surfers crash onto the shore. Waves as big as 45 to 55 feet (13.7 to 16.7 meters) tall have been recorded in Mullaghmore Head. Along with the locals who are very familiar with the surf, Bundoran has attracted lots of international surfers looking to catch the perfect wave.

While surf culture hasn't taken over here--- you're not likely to hear "dude" or "man" spoken in an Irish brogue -- you will definitely find hard-core surf enthusiasts who are not intimidated by the freezing water (sometimes dipping to the 40s Fahrenheit, 4.4 degrees Celsius), rainy weather and rocky terrain found in this part of the Ireland. 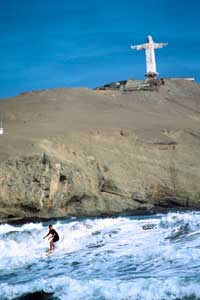 With more that 1,500 miles (2,414 km) of coastline, Peru is one of South America's hot spots for surfing. Lima, the country's capital, offers a variety of locations for all types of surfers. From the beautiful, serene beaches around the city to the many rugged breakers that jet out on the coast, Peru's beaches offer prime spots for beginner and advanced surfers alike.

Peru, South America's third most populated country, is home to 28 million people, many of whom are hard-core surf enthusiasts [source: New York Times]. The waves here are as big as those found in Hawaii, yet this spot has yet to attract an overwhelming tourist crowd. In fact, some of the best spots are often nearly empty, so surfers can enjoy big waves without swarms of tourists.

Locals, however, are well aware of the waves found in their region. Advertising in the area is dominated by billboards featuring swim-suit clad surfers endorsing everything from cell phones to soft drinks. Surfing seems to run in the blood of the people of Peru. Peruvian Sofia Mulanovich won the World Surfing Championship in 2004, a competition that is usually won by American and Australian surfers. As a result of her victory, surfing caught on as a sport that rivals soccer in popularity among Peruvian teenagers.

One of the great advantages about this area of Peru is the variety of waves that can be found within a span of a few miles. Directly around the capital city, you'll find surfers chasing waves all day and night. At Kon Tiki, waves are so huge that a tow-in is sometimes required. Pros like Mulanovich practice at nearby La Isla. At Pico Alto, waves grow up to 25 feet (7.6 meters) high. Punta Hermosa, 30 miles (48 km) North of Lima, is a center of Peruvian surf culture. 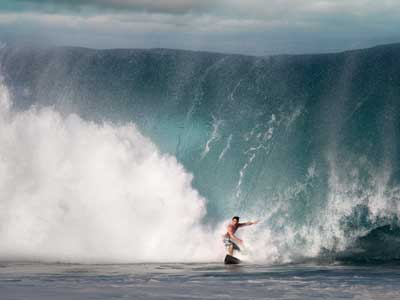 Surf's up -- really up. This is the kind of wave you might see on the North Shore.
Ed Freeman/Getty Images

If you're looking to check out Hawaii's famous waves but beat the touristy crowd, head to the North Shore of Oahu. This pristine coastline is famous for its coconut palm trees, clear, warm turquoise water, beautiful white-sand beaches and world-class waves. It's also home to some of the best surfing spots in the world, such as the Ehukai Beach Park, Banzai Pipeline and Sunset Beach.

Ehukai Beach Park is located about 100 yards (91.4 meters) from the Pipeline where waves form an almost-perfect tube. World championship surf competitions are often held here. You can find wave swelling from 15 to 20 feet (4.5 to 6 meters) at nearby Sunset Beach. And Waimea Bay is home to some of the world's largest recorded waves.

During the winter months, waves in Oahu can reach over 25 feet (7.62 meters). As with any big-wave surfing spots, surfing can be extremely dangerous for both the experienced and the beginners. Surf here can quickly rise from 2 feet to 25 feet (0.6 to 7.62 meters) in the course of a day. In fact, during the winter in Waimea, waves have been recorded at 50 feet (15.2 meters). Luckily, Oahu has many guarded beaches, and it's best to ask a lifeguard about conditions. Even the pros do it. But if you want to take a more laid back approach to surfing at Oahu, you can ride the waves near caves full of Hawaiian sea turtles. 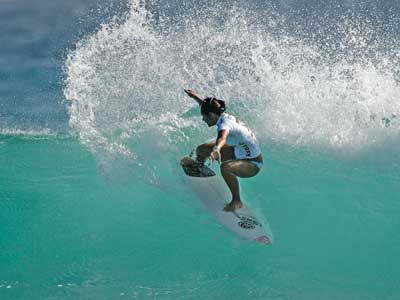 Hawaii's Megan Abubo competes in round one of the Roxy Pro on the ASP World Championship Tour in 2005 in Gold Coast, Queensland, Australia.
Steve Robertson/ASP via Getty Images

Aussies love their surf, and one of the most popular places to ride the waves in Australia is on the Gold Coast of Queensland. Since about 90 percent of the nation's population lives along the coast, surfing plays an important role in the lives of many Australians. You can see the influence of surfing on everything from fashion to food to music. And Aussies know their surf spots.

With 57 beaches and numerous world-class point breaks, the Gold Coast --- with waves swells ranging from a few feet to 25 feet (less than a meter to 7.62 meters) -- is a great place for both beginners to learn the basics of surfing and advanced surfers to ride some epic waves. There are also too many excellent surf breaks to count. Some of the most popular include South Stradbroke Island, The Spit, Burleigh Heights, Main Beach, Surfer's Paradise, Broadbeech and Tallebudgera Beach. Home to the most consistently good waves in the country, the Gold Coast hosts the first round of the Association of Surfing Professionals World Tour. The sub-tropical climate here provides warm water temperatures year round.

It's pretty easy to catch a wave here, too. In the morning, if the waves' swells are coming from the east and the wind conditions are good, you can easily spot a break and are almost guaranteed some great waves. You can catch the biggest waves in the winter. But tourists beware: Due to the popularity of this spot, locals like to guard their turf. Locals keep quiet about the best spots to catch big waves, and often flock to lesser-known locations to beat the tourist rush. 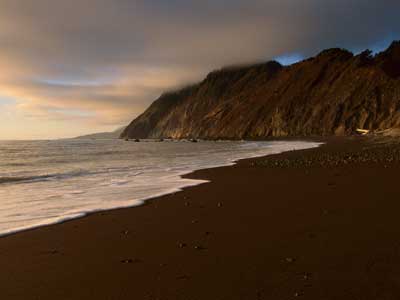 Surfers are notoriously secretive about the best spots to find the biggest waves. When word gets out about these unspoiled locales, tourists flock to them, and peaceful laid-back surfer lifestyle can be lost. Located north of San Francisco, California's Lost Coast is the longest stretch of undisturbed coast in the continental U.S. It hasn't been discovered by many surfers, but the surf break here is the stuff of legend.

Ghost Point is one of the best spots along the Lost Coast to check out the waves. Winds here blow strongly against the rugged coastline, and although the waves at Ghost Point aren't the biggest in California, their consistent qualities of speed and symmetry make them perfect for surfing enthusiasts. And the Mediterranean climate of this area of California allows for cold ocean water and steamy land temperatures, perfectly suited for surfing. In the summer, ocean temperatures are in the 60s and 70s Fahrenheit (15.5 and 21 degrees Celsius).

The Lost Coast is about 80 miles (128.7 km) of shoreline, bordered to the South by Sinkyone Wilderness Park. North of the park, past the mouth of the Mattole River, is King Range National Conservation Area, which is the perfect spot for backpackers and wilderness lovers.

Sandstone sea cliffs mark the shore of this spot along the Pacific Ocean, about a five-hour drive north of San Francisco. There are powerful currents and dangerous rip-tides here, so be on your guard. And the terrain here definitely isn't for the faint of heart. The area is so rugged that when the construction crew building State Route 1 saw it, they changed plans and moved the project 30 miles (48 km) inland. 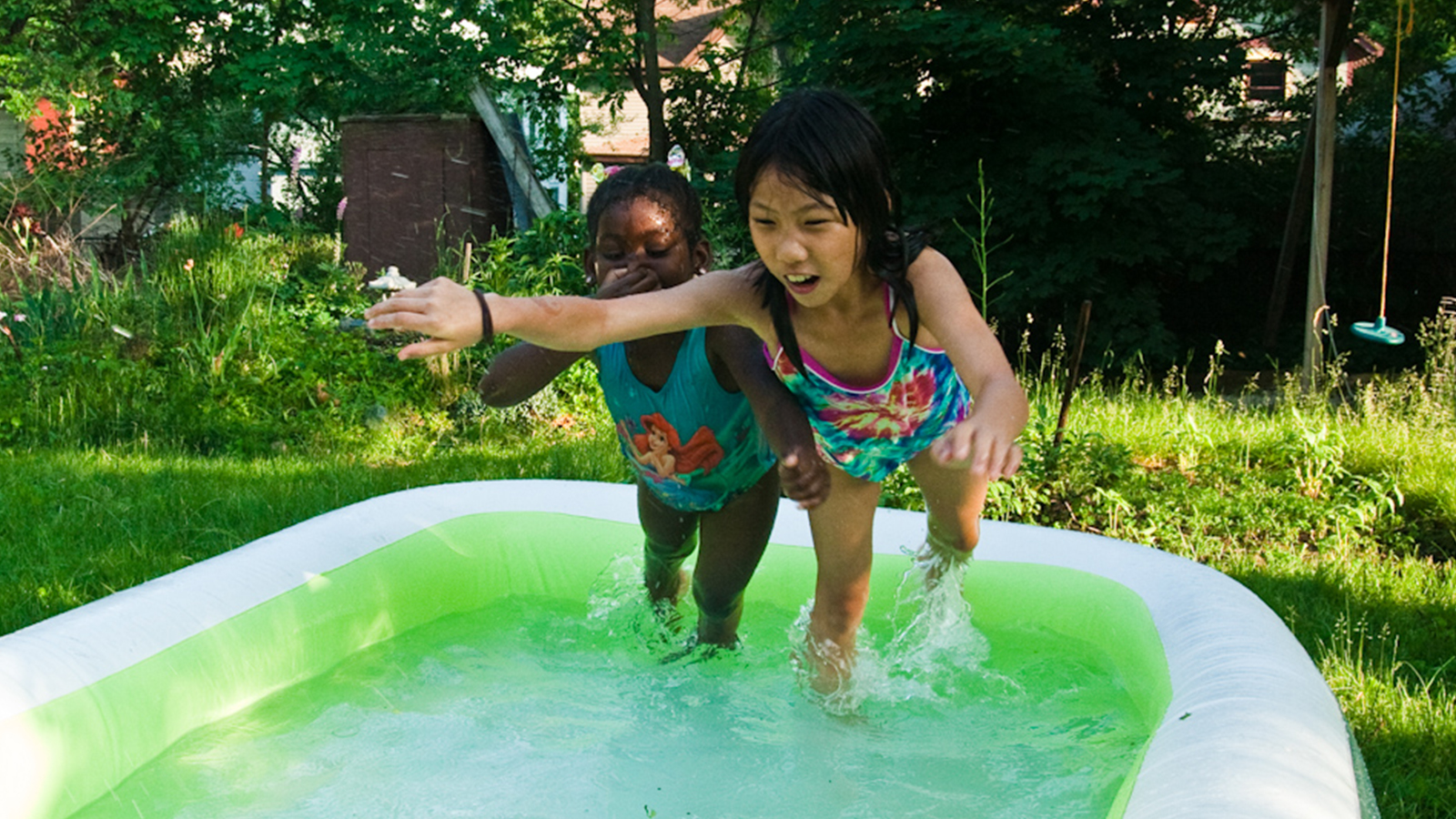