by Christine Venzon
Prev NEXT
5

Learn to Read the Weather 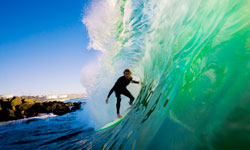 If you understand how the weather, the wind and the terrain affect the waves at your beach, you'll be able to forecast a great surfing day.
iStockphoto/Thinkstock

You wouldn't plan to play golf if the forecast called for high winds and thundershowers. At the very least, the wind would play havoc with the ball. At worst, you could get electrocuted.

Likewise, surfers must check surf reports and surf forecasts before hitting the beach. Wave height, high and low tides and other climatological data affect surf conditions in a given area. To apply the information, you need to understand the key terms and some basic meteorology. For example, suppose a surf forecast calls for a "SE groundswell and local windswell mix this morning." Does that sound like gibberish to you? Here's the scoop: Groundswells are high-energy waves, produced by strong winds far out at sea. Windswells are weaker, the products of local winds. SE, of course, stands for southeast, the direction from which the waves come. If you know your beach's geography (because your heeded our previous tip), you can predict what type of waves you'll get at your beach today.

Like tide tables, surf reports and forecasts are readily available online. And as with most information today, there's an app for that -- several, in fact. Graphs, charts and live-stream video of the beach are as close as your smartphone or tablet.

It's important to note that surf conditions can be less predictable than the weather in general, however. Thus, it helps to be able to read climatological signs of change. For example, a rising north wind (blowing north to south) is welcome on southward-facing beaches. The wind provides resistance for incoming waves, causing them to gain height.

Is It Safe to Swim During the Coronavirus Outbreak?