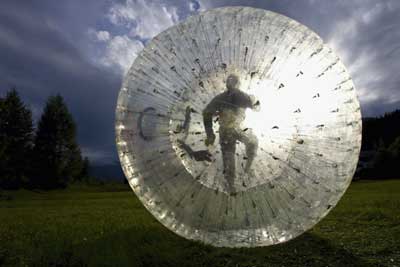 It's spherical. It's plastic. It's much larger than a beach ball. And, it's about to roll down a grassy slope with a passenger inside.

­The zorb tumbled into existence in the mid-1990s in New Zealand, hitting the extrem­e sport scene in 1998. What has now become a worldwide phenomenon is a simple ride inside a plastic ball down a grassy -- or even snowy -- slope. In areas where there are no natura­l hills, zorb operators may build a metal track down which the zorb rolls. Although zorbing takes place on land, it can be a wet and wild experience when water is added to inside of the ball for the ride.

A zorb is actually two separate balls, both made of flexible plastic. The outer ball is around 9 feet (2.7 m) 8 inches (20 cm) in diameter. The inner ball, which can accommodate one to three passengers, is about 6 feet (1.8 m) 6 inches (15 cm). This leaves roughly 2 feet (60 cm) of air to absorb the shock for the riders as they make their way downhill.

­The zorb is made of a 0.8 millimeter thick, transparent but strong plastic. The inner and outer balls are connected by hundreds pieces of rope, which keeps the balls turning together. The average zorb has one or two openings through which the rider enters and exits. The openings are normally around 2 feet (60 cm) wide. They not only provide an entrance and exit, but ensure that the passenger has plenty of oxygen for the breathtaking ride. 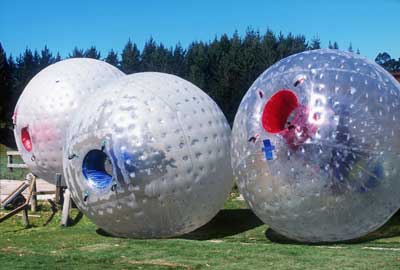 For Dwayne van der Sluis and Andrew Akers, the idea of walking on water held endless fascination. That's why the two friends set out to develop a floating ball that could hold a standing person on water. At the time, such balls were already in production, but they had to be inflated and deflated as the passenger entered and exited, which took time and effort. Van der Sluis and Akers thought they knew how to solve the problem -- design a ball within a ball.­

The idea for the double ball was that the air would remain pocketed between the inner and outer balls, and the rider would climb inside the inner one. This way, the ball stayed inflated at all times. Van der Sluis and Akers built a prototype, which they patented and trademarked as the zorb.

As the partners hoped, the ball enabled passengers to walk on water. But there were other pitfalls. On the open water, in the lightweight ball, the person had little control over the ball's movement or direction.

So, what to do with the plastic sphere? Well, strap someone inside of it and then roll it down a hill, of course. Since New Zealand was known around the world for offbeat extreme sports developments, such as bungee jumping, the zorb might attract a following, the zorb inventors thought.

Akers and van der Sluis picked up two additional partners, and a business was born. The men insisted on proper training and maintenance to guarantee safety and integrity. For this reason, they chose to franchise zorb operators rather than sell the zorbs outright.

In 2000, van der Sluis made the decision to return to his original career as a software engineer, and left the company. Six years later, Akers, citing differences with one of the other partners, left the company as well. Despite these business distractions, the company has continued to add franchises.

In the U.S., you can go zorbing in the Smoky Mountains of Tennessee. You can also go zorbing in the Czech Republic, Los Cabos, Slovenia, Ireland, Sweden, Thailand, Korea, Australia's Gold Coast, and the spot where it was developed, Rotorua, New Zealand.

Prices vary for different packages, but generally the thrilling ride is about $40 a trip. The price is comparable to spending the day at a local amusement park or taking a helicopter tour.

A zorb may look like a hamster ball, but they're not alike. First of all, a hamster ball is made of rigid plastic. The hamster runs along the inside of the ball to move it forward. A zorb, on the other hand, rolls on its own -- pulled by gravity down a slope. The passenger can try to remain upright and run as the zorb turns, but few are successful. In fact, it's such a challenge to remain upright in a rolling zorb that many zorbing facilities award a T-shirt to anyone who manages to remain on two feet throughout the ride. 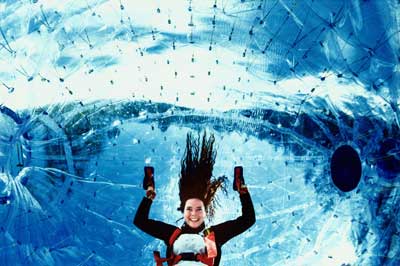