Browse the article What are wife-carrying contests? 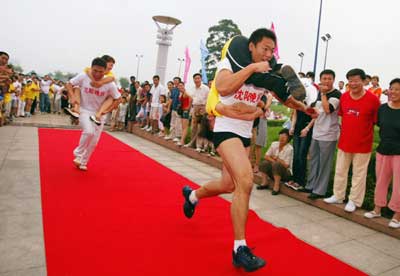 A ­wife-carrying contest is actually a lot like it sounds. Men, carrying wives, race through an obstacle course that includes sand, water and fences. The prize for winning the race is the wife's weight in beer. It's really all very civilized.

The sport -- yes, it's a sport -- originated in Finland, and was most likely inspired by a duo of historical tales. A 19th century legend has it that men stole wives from neighboring villages. In a second tale, an outlaw named Rosvo-Ronkainen made potential soldiers prove themselves in a race where they carried heavy sacks [source: Finnguide]. Put the two tales together, and what do you get? Wife-carrying races.

Of wacky and ridiculous competitions, Finns are not afraid. Take the Mobile Phone Throwing World Championships, where contestants chuck cell phones as far as they can. Or, the Sauna World Championships, where the winner is the person who sweats it out the longest. The Wife Carrying World Championships are hosted each July in the Finnish town of Sonkajärven. The contest's popularity has inspired similar events in the United States, Australia, Ireland and even China, among others. Some contests -- like the North American Wife Carrying Championships -- award money to winners to pay for travel expenses to compete in the big leagues -- Finland. Even celebrity and former U.S. NBA basketball star Dennis Rodman competed at Sonkajärven -- although he only ran the last 100 meters of the course, claiming he wasn't prepared for such a grueling contest [source: GoldenPalace.com].

With any competition come rules and regulations, strategy, athletic prowess. Would wife carrying really be an exception? Of course not. 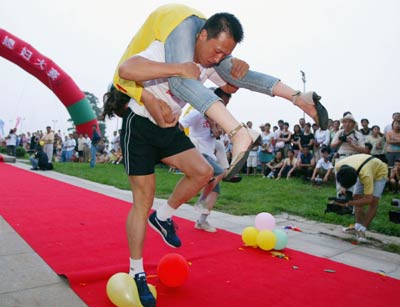 This wife-carrying contest participant is using the Estonian carry technique to wield his load.
Getty Images

Naturally, wife-carrying contest rules may vary from event to event, from country to country. But Finnish wife-carrying race officials assign the following rules and regulations to their wife-carrying championships: First of all, everyone involved must have fun. No worries, unmarried men -- competitors don't have to carry their own wives. Rules state that a part­icipant may carry his own wife, his neighbor's wife or someone he found "further afield." The onl­y stipulation is that the wife must be more than 17 years of age and weigh a minimum o­f 108 pounds (49 kg). If the wife weighs less than that, she must carry a weighted rucksack to make up the difference. The official length of the track is 831 feet (253.5 meters). The surface of the track includes sections of sand, grass and gravel. There are two obstacles to climb over, as well as a 1-meter- (3.2-feet-) deep water obstacle to wade through.

If a contestant drops his wife, he incurs a 15-second penalty. Indeed, wives are dropped all the time -- that's why they wear helmets. Officials also award special prizes for best costumes, which adds a festive element to the event.

In addition to the standard wife-carrying race, couples have the option to participate in the official wife-carrying sprint, which is only 100 meters (328 feet) but includes similar obstacles. The Wife Carrying World Championships also features a team competition, which has the same rules as the wife-carrying contest, but the three men on each team take turns carrying one wife. The twist? Before handing off his "wife" to the next contestant, each man must chug a drink.

You're probably wondering if, in the interest of equal rights, a wife is allowed to carry her husband, or, if two women or two men can enter the contest. Finnish rules prohibit any team that isn't strictly male/female, and with the man as the carrier. Some consider this rule strange, considering the country of Finland prides itself on becoming the first parliament in the world to adopt full gender equality [source: Korpela]. But the sport is all in good fun. Even feminist Finn leader Pirjo Ala-Kapee believes the event isn't demeaning to women, calling the wife-carrying contest "uplifting" and "authentic" [source: Mattox].

With any sport comes technique, and wife carrying is no exception. There are several different tried-and-true styles for carrying a wife. Although participants are encouraged to employ any technique they choose, most wives either: ride piggyback, sit on the man's shoulders, lay around the man's shoulders like a snake or a boa (fireman-style), or they climb on their partner for what is dubbed the Estonian carry. The most popular style, the Estonian carry, was named for the country that's won the last 11 Wife Carrying World Championships. The technique works well because it distributes the wife's weight evenly and helps the carrier to retain optimum balance while he races. But it's a tricky move to pull off. And, some people think it looks ridiculous. The wife clamps onto her partner, upside-down, with her front against the man's back. She wraps her arms around his waist and her legs around his head and neck area. This means the woman must get up close and personal with her partn­er's rear end.

How does one train for wife carrying? The Finns humorously advise incorporating training into daily routine, of course -- carry your wife around in the bath, the supermarket, the playground or the gym. But in all seriousness, John Farra, 2006 winner of the North American Wife Carrying Championship, trained by running around his yard with an 80-pound (36-kg) bag of cement on his back [source: Olsen].