The Future of Urban Gaming 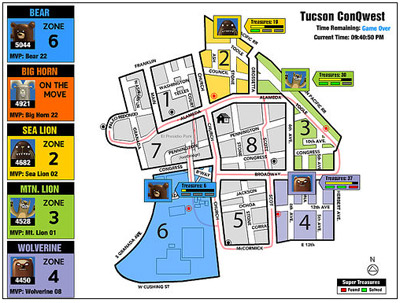 As GPS-enabled devices become commonplace, urban games are bound to increase in popularity. Already communications companies are using urban games (or location-based games), to lure consumers into subscriptions or as marketing campaigns to attract the youth market.

However, all this gaming innovation is not moving forward unimpeded. GPS systems need a line of sight to a satellite to work. This means they don't work indoors or in urban settings surrounded by tall buildings. There are also problems with the resolution of current GPS systems -- they're not always capable of finding exact locations, usually getting within tens of feet at best. This is in part due to limitations of current technology including built-in limitations put in place by the United States military, which built and operates the global positioning satellites used by GPS systems.

Technology leads to another problem: this kind of gaming can be very expensive. Real-time audio or video streams, mobile Internet connections, and cell phone minutes can cost a bundle, even in a game that only lasts an hour. Networks aren't always perfect, either. A slow or dropped connection can bring the entire game to a screeching halt.

Other problems involve playing in public spaces. There will be people around who are not aware that there is a game going on around them, and they can become confused or angry at players. It is also possible for games to lead players into unsafe areas. Some of these factors can be monitored by "referees" who oversee the game.

One of the strangest problems with urban gaming comes from pervasive games. These are games that are ongoing, with no clear boundaries between the player's regular life and the game. Phone calls, e-mails, and people they meet could all be part of the game -- or not. This can lead to an unsettling feeling of paranoia, with the player never knowing for sure if a given situation is part of the game or not.

However, the potential benefits of urban gaming are numerous. The social interaction and feelings of adventure when out exploring new settings or working to solve puzzles can be very rewarding. As events like the "Treasure's Trove" hunt illustrate, companies are willing to offer extravagant prizes as a way to generate publicity. Western New York radio station WEDG and Atlanta radio station WWWQ both held contests called "The $10,000 Fugitive" and "The Free Money Fugitive." A person was selected to be the fugitive, and that person roamed the city (and also went about her daily life), calling the station to give on-air clues about her identity and location. The first person to find the fugitive won the prize. Online communities sprang up immediately, pooling clues and theories to track down the fugitive. In both cases it took several weeks to finally track her down. It seems likely that similar "official" urban games will be showing up in the near future.

For more information on urban gaming and related topics, check out the links below.