Games All Around You 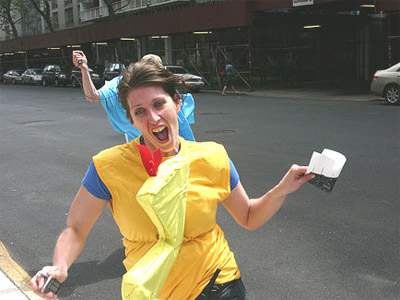 The majority of urban games take place in Europe. However, one popular game is played around New York City's Washington Square Park. In "Pac-Manhattan," players wear costumes representing characters from Pac-Man, the classic arcade game. The Pac-Man player must run around the city streets, "gobbling" virtual dots while avoiding the ghosts who are trying to eat him.

"Pac-Manhattan" is a phone-based game. Each player on the street has a "general" who sits in a control room looking at a map. Whenever a player reaches an intersection, he or she reports the location to the general, who can then track the player's position on the map. Pac-Man eats the dots (which don't actually exist) by simply traversing an entire city block. Some intersections have power pellets that make Pac-Man invincible and allow him to eat ghosts for two minutes. All of this information is relayed between the players and generals, so everyone knows what's going on.

"Uncle Roy All Around You" is a somewhat more complicated game in which the player must find and meet with the mysterious Uncle Roy within the 60 minute time limit. Uncle Roy sends messages and instructions to the player, and there is interaction between the street player and online players. At the end of the game, "Uncle Roy" asks players a strange series of questions, including, "When can you begin to trust a stranger?" The creators of the game state that their purpose was to explore the boundaries between strangers.

Portable gaming console Gizmondo has announced plans for "Colors," a game in which players win credits and items in a videogame that they then use to buy real world turf. The Gizmondo's built-in GPS can detect when you're on your own team's turf, or if you're in another gang's territory, which can affect the play within the videogame.

"Conqwest" is a game in which teams roam city streets holding giant inflatable mascots while searching for semacodes, images similar to bar codes that they can photograph with special camera phones. Each semacode is worth a certain number of points, and the first team to find 5,000 points wins a $5,000 scholarship [ref].

Wireless service providers are unveiling a range of new games based on phones and handheld computers with GPS. You can find a list of them here.

In the next section, we'll explore the future of urban gaming.