Where did Urban Gaming Come From? 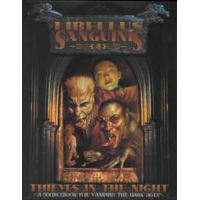 One of the "Vampire: The Masquerade" rule books
Photo courtesy HowStuffWorks Consumer Products

While many urban games evolved out of performance art projects over the last decade or so, the ideas used in such games come from a variety of sources. Taking a game off of the tabletop and playing it in a public space was first done on a large scale by fans of LARP, or live-action role-playing. In a LARP, each participant takes on the role of a character within the game, and the players interact with each other "in-character." Different LARPs have different rules governing interactions. For example, if two characters resort to combat with each other, the fight may be resolved with rock-paper-scissors, or by rolling dice. There's really no way to win at LARP -- the point is simply to advance the ongoing storyline of the game, although each character will have specific motivations and goals. There are likely LARPs going on today that incorporate GPS or mobile phone technology, making them true urban games.

Perhaps the most popular LARP was White Wolf's "Vampire: The Masquerade." In this game, ancient vampire clans exist in the modern world, infiltrating human society and secretly plotting, while hiding their true nature from most of the world. Players took on the roles of powerful vampire lords and their minions.

The most widespread precursor to urban gaming is geocaching. A geocache is a small box with a few items and a logbook hidden in a publicly accessible place. The GPS coordinates of the cache are posted on a Web site. Geocachers use their handheld GPS devices to hike to the cache's location, where they take an item from the box and replace it with something small and family-friendly. Then they sign the logbook, and later report their find on the website.

Some geocaches have multiple parts, requiring cachers to decipher clues and puzzles to lead them to the next cache. In urban settings, caches are sometimes hidden in small film canisters -- these are known as microcaches. Geocaching is probably the easiest urban game for someone to get involved with, because it is ongoing and there are caches all over the world. A handheld GPS device, the only requirement for playing, can be purchased for about $100.

In one instance, an urban game began spontaneously when several online communities began sharing information in the hunt for some very valuable treasures. Author Michael Stadther's book "A Treasure's Trove" contained difficult clues that led to the locations of twelve tokens he had hidden in state and federal parks across the United States. Each token was redeemable for a jewel worth about $50,000. The use of technology to coordinate search efforts led to all twelve tokens being found much more quickly than the author anticipated.

In the next section, we'll learn about some specific urban games.