A New Kind of Game 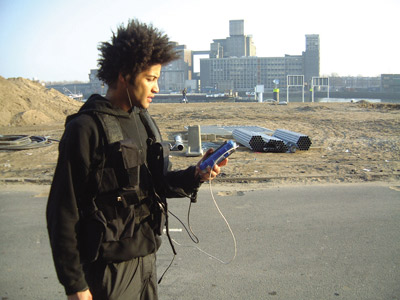 An urban gamer playing "Can You See Me Now?"
Photo courtesy Blast Theory

Urban gaming is such a new phenomenon that a strict definition is hard to come by. All urban games have a few things in common, however. They all take place in public spaces. Often this is a city, or a defined area within a city, but some games take place in wilderness areas, such as state parks and other publicly accessible places. The play space is always much larger in scale than traditional games -- in fact, it could be said that they occur at "human scale," rather than a miniature scale on a tabletop, or as an abstraction in a computer game. Finally, all urban games incorporate communication technology, such as cell phones, GPS receivers, digital cameras, and the Internet.

The organizers of urban games, also called "location-based games," often have more lofty goals in mind than enjoying new technology. Blast Theory, an artists' collective responsible for European games like "Can You See Me Now?" and "Uncle Roy All Around You," has a lot to say about the ramifications of technology and public gaming on their Web site:

Blast Theory [is] looking to identify the wider repercussions of this communication infrastructure. When games, the internet and mobile phones converge, what new possibilities arise? These social forces have dramatic repercussions for the city. As the previously discrete zones of private and public space (the home, the office, etc.) have become blurred, it has become commonplace to hear intimate conversations on the bus, in the park, and in the workplace. And these conversations are altered by the audience that accompanies them: we are conscious of being overheard and our private conversations become three way: the speaker, the listener and the inadvertent audience.

These games can take almost any form. Usually, they revolve around finding someone or something, or avoiding being found. Sometimes there isn't really a point to the game other than the experience itself. Some early urban games evolved out of performance art pieces. One of Blast Theory's first projects to incorporate non-artists in the experience was called "Kidnap." Ten people -- who registered their desire to participate ahead of time -- were placed under surveillance. Two of them were literally kidnapped and held captive for 48 hours. The entire process was broadcast live on the Internet.

An urban gamer running while playing "Can You See Me Now?"
Photo courtesy Blast Theory

In many cases, people who view the game online can also participate. The locations of street players are tracked via satellite and relayed to a virtual map, and online players can text message other participants with instructions. In "Can You See Me Now?" a live audio stream was broadcast from the street players so the online players could hear them as they ran around the city.

Some games allow more passive participation. Cell phones or handheld computers use GPS positioning to find virtual objects or other players who happen to be nearby. For example, a Japanese game called "Mogi" is based on virtual objects whose locations have been programmed into the mobile phone system. Players can find out which items are close to them and then pass over the proper coordinates to "collect" the item. People can also trade items and find new ones in different parts of the country.

Next, we'll find out how urban gaming got started.