The History of Parkour 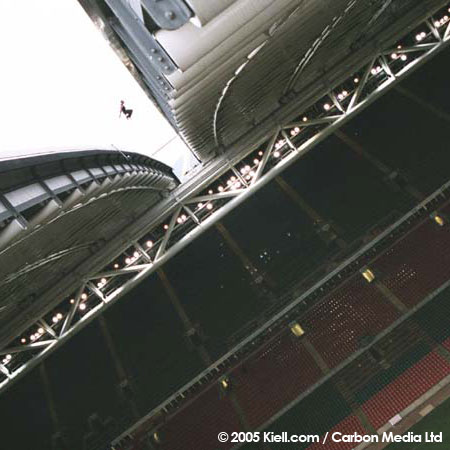 Parkour's development into a cohesive discipline first began in 1988 in Lisses, France, when David Belle was 15 years old. Belle was greatly influenced by his father's experiences as a renowned rescuer and military firefighter in the Paris regiment of the sapeurs-pompiers. As a highly skilled and talented athlete, Belle's father, Raymond, adapted well to the training philosophy of physical education expert Georges Hébert, a former naval officer.

While traveling through Africa with the French Navy, Hébert witnessed the indigenous peoples' remarkable athleticism and how they achieved it by interacting with their surroundings. He said of them, "Their bodies were splendid, flexible, nimble, skillful, enduring, resistant and yet they had no other tutor in Gymnastics but their lives in Nature." This led him to develop the Natural Method, or méthode natural, which uses only the body and its surroundings for physical development. Hébert believed the purpose of physical education is to create strong, able-bodied individuals who are useful to society.

The holistic training method Hébert developed emphasizes the integration of the human mind and body to overcome obstacles through running, jumping, leaping, walking on all fours and climbing. His efforts directly contributed to the military obstacle course, or parcours du combattant. The military obstacle course, still used by the French military today, consists of different stations like rope climbing and swinging, balancing on wooden beams and climbing ladders. Through these activities, trainees gain victory over their fears and physical weaknesses through repetition.

It was Belle's love for martial arts films, especially the work of Bruce Lee -- and the scenarios he imagined, often themed around rescue, escape and pursuit -- that inspired him in the early stages of parkour, and remains a source of inspiration for others. Lee's approach to martial arts stood in stark contrast to that of his contemporaries. Instead of rigid structure, his approach embraced adaptability and evolution -- each central to the heart of parkour.

Though Belle initially developed parkour with friends, his exceptional athletic ability propelled him onward as the discipline's leader, eventually putting him into the spotlight where he remains today, though reluctantly. Other contributors to the development of parkour include Sebastien Foucan, Kazuma and Stephane Vigroux. Parkour is often compared to skateboarding, mostly because it uses urban terrain to perform "tricks." However, most traceurs reject the comparison, finding comparisons to the negative public image of skateboarding (that of rebellious and misguided youth) inaccurate and unfair.

Parkour emerged in the greater public's consciousness with the help of "Rush Hour", a short promotional film for BBC ONE. The film features parkour's founder, David Belle, running across the rooftops of London, leaping from building to building to avoid the gridlocked traffic below. The film caught the public's imagination, and soon budding traceurs showed up everywhere. Unfortunately, because parkour had not been organized yet, these new traceurs (mostly teenage boys) had no proper instruction and a complete lack of context. Belle and his associates had attained their level of skill through strictly regimented training over the course of more than a decade. What followed were injuries and, in the case of two unfortunate boys in France, death.

When parkour hit the English-speaking world, it was given another name: "free-running," mostly for the ease of use and memory. Now the two terms represent an unfortunate schism in the parkour community. Purists argue that, while very similar to parkour, free-running is more liberal when it comes to the rule of not moving backward. On this side of the argument, parkour in its purist form is meant to be only practical and efficient, but free-running allows moves to be purely aesthetic.

Groups like Urban Freeflow are lambasted in online forums for "prostituting" the art of parkour through their participation in high-profile media projects, like television advertisements, film projects and corporate events. However, in light of David Belle's contributions to television and film, and those of parkour's other founding fathers, this position is difficult to support. Other arguments against the purists' position use other sports as examples, arguing that commercialization and competition doesn't diminish individual experience, but rather it's what one makes of it.

To date, official parkour competitions don't exist. If purists have their way, they never will. Urban Freeflow's principal writer, Dan Edwardes, argues that "competition already exists on many levels within the free-running community: friends challenge each other to improve upon their most recent efforts; training partners push each other during sessions, even involuntarily; members of the same crew feed off each other's energy and achievements as they seek new boundaries to break. This is competition, even though it happens within a loose and perfectly amicable framework."

Next, we'll look at some parkour moves and training programs run by Urban Freeflow.