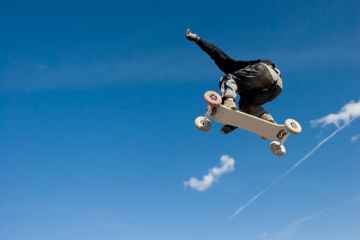 Mountain boards offer snowboarders the chance to catch some air once the weather warms up. See more pictures of extreme sports.
©iStockphoto.com/christophriddle

For avid snowboarders, summertime is bummer time. The start of the summer season means another six months without waist-high powder, death-defying drops and high-flying half-pipes. For board-sport fanatics, there's some solace in surfing and skateboarding, but nothing quite equals the smooth carving sensation and strapped-in control of snowboarding.

In the early 1990s, a few snowboarding bums in California were looking for a way to beat the summertime blues. They rigged four knobby tires to a snowboard-sized deck, screwed on some modified bindings and started shredding the grassy slopes of off-season ski resorts. Bailing on dirt, grass and gravel proved a bit more painful than snow, but the ride was equally addictive.

Jason Lee, one of these California pioneers, was the first to call the new sport "mountain boarding." Little did he and his buddies know that all across the world, off-season snowboarders were building their own versions of "dirt boards" and "no snow boards." A sports phenomenon was born.

Lee went on to help found MBS Mountain Boards in 1993; the company sold its first mountain boards a year later. Since then, the sport has exploded in popularity as more and more people discover the distinct advantage of mountain boards: you can ride them anywhere at any time.

Mountain boards are extremely rugged, meaning they can maneuver over any terrain imaginable. Mountain boarders can be found on single-track mountain biking trails, on dirt BMX courses, in skate parks, on steep grass hillsides, on gravel roads and city sidewalks.

In downhill mountain boarding, single riders negotiate long courses vying for the best time. In freestyle, it's all about air: Riders take huge jumps, carve rails and pull mind-blowing aerial maneuvers in terrain parks and skate parks. For boarder-cross -- a hybrid of downhill and motocross -- four riders jostle for position as they tear through banked turns and fly over jumps and drops. Technically it's illegal to knock each other over, but the wrecks are half the fun.

When a professional mountain boarder hits a gnarly jump and spins 900 degrees before landing 50 feet (15.2 meters) down the hill, he appears to defy physics. In the next section, we'll look at the scientific principles that make mountain boards work.

The Physics of Mountain Boarding

Friction is the force that keeps acceleration under control. As one object moves across another, friction acts in the opposite direction. Mountain boarding tires -- which are wide, thick and made of rubber -- are designed to produce a high level of friction, or traction, at all times. Good traction, even on uneven or loose road surfaces, is crucial to slowing down a mountain board, executing controlled turns and making sudden stops.

To turn or steer a mountain board, riders rely on Newton's third law of motion, which states that every action produces an equal and opposite reaction. When a mountain boarder leans hard on his heels on the left side of the board, he is directing force to the right. According to Newton's third law, the ground produces an equal force in the opposite direction, pushing the board to the left. The net result: The harder you lean to one side, the sharper you'll turn to that same side.

For really sharp turns or aerial maneuvers, mountain boarders follow the law of conservation of angular momentum, which states: If you're not rotating, you need a twisting force, or torque, to get you going [source: Exploratorium]. To initiate a sharp turn, a snowboarder creates torque by twisting his upper body in the direction of the turn. This torque causes the legs to twist quickly in the same direction. The same torque principle is applied in aerial tricks to pull 180-, 360-, 720- or even 900-degree rotations.

Pumping is a trick mountain boarders use it to gain extra speed going up the ramp of a jump or to accelerate coming over a hump. When a boarder speeds toward a steep ramp and begins to ascend, centripetal force makes it harder for the rider to stand straight up. By pumping his legs and standing up at that moment, the rider creates a net energy gain. This gain translates into increased acceleration [source: Exploratorium].

Now let's take a break from the physics lesson and take a closer look at mountain boarding gear. 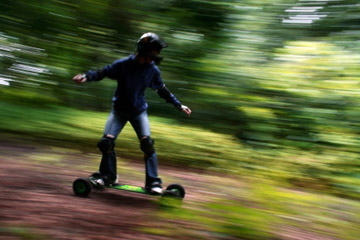 Mountain boards are a mash-up of snowboards and skateboards, exactly what you'd expect from this board-sport hybrid. The deck of a mountain board -- the board itself -- looks a lot like a snowboard. It has roughly the same dimensions and is built from the same materials, wood and carbon fiber. Mountain board decks are more flexible and springy than skateboards, contributing to better shock absorption and smoother steering control.

One of the biggest differences between a mountain board and a skateboard are the tires. Skateboard tires are solid plastic and rotate on bearings. Mountain board tires -- known as tyres -- are like miniature mountain bike tires. They're big -- between 8.5 and 10.5 inches in diameter --made of knobby rubber and filled with air. The pressure in the tires can be adjusted for greater traction or speed.

Tires are attached to axles called trucks. Mountain boarding trucks are thicker and longer than skateboarding trucks and made of rust-proof aluminum. The trucks are attached to the board using a unique suspension system called a channel truck. Channel trucks pivot on a central pin, like a see-saw. This pivoting design offers a large range of motion. The trucks are cushioned by springs and shock absorbers on both sides of the central pin. This allows for deep, carving turns even at high speeds.

Before you hit the slopes, check out some of our mountain boarding tips on the next page.

The first thing to learn as a beginner mountain boarder is how to fall. You're going to be falling a lot, so you might as well do it with style. Whatever you do, don't try to jump out of your bindings and run out of a fall. That's much more dangerous than just falling with the board, because you risk serious ankle injury [source: Munro Boards]. The best way to fall is to bend your knees fully, lean back and tip over onto your bum.

The riding style of mountain boarding is more similar to snowboarding than skateboarding. The idea is to make wide, carving turns, not to shoot straight down the hill as fast as you can.

To steer a mountain board, you apply pressure to either the toe or heel side of the board and shift your body weight into the turn. The idea is to carve smooth, interconnected turns. As you approach the end of a heel-side turn, you carefully shift your weight in the other direction to execute a toe-side turn. To slow down, turn up the slope of the hill. If you feel like you're going too fast, simply lean into your turn until the nose of the board is pointing slightly uphill.

To stop a mountain board, turn very sharply up the hill, allowing your back foot to slide. This is called a powerslide. To help initiate a powerslide, bend down and grab the front side of the board and pull up as you turn [source: Board Pass]. You must master the powerslide before attempting to ride down steep terrain [source: Munro Boards].

Remember that mountain boarding tires are inflatable. That means you can adjust the tire pressure based on your skill level and the type of terrain. Lower tire pressure means you'll move slower and have better traction on rough terrain. Recommended tire pressure for beginners is between 5 and 15 psi [source: Board Pass].

Mountain boarding doesn't have to be extreme. With the right safety precautions, this hybrid sport is safe for all ages and skill levels. Read our safety tips on the next page. 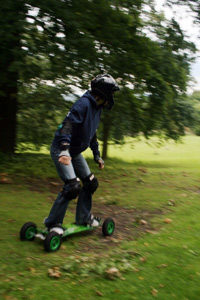 If you have good balance and a healthy sense of adventure, you can mountain board. Mountain boarding is considered safe for anyone over the age of six and weighing at least 50 pounds (22.7 kilograms), although kids with skateboarding or snowboarding experience can start even earlier [source: MBS].

For the safest experience, always ride with a friend [source: Munro Boards]. If you turn an ankle or sustain a more serious injury, you'll want someone there to help.

Before you ride, perform a safety check on your equipment. Tighten all bolts and screws. Look for any visible cracks on your board or damage to your tires or trucks. Make sure that the bindings lock completely and are securely fastened to the board. If you have channel trucks, make sure the springs are working well and that the plastic shocks aren't broken or compacted [source: Board Pass].

Mountain boards work on all types of terrain, but the best riding location for beginners is a soft grassy hill with a gentle slope. Make sure your tire pressure is appropriate for the terrain and for your skill level. The lower the skill level, the lower the tire pressure.

Always know your terrain and the course you're going to take down the mountain. Scout out the slope first for any hidden obstacles. Once you're on the hill, don't stop someplace where other riders can't see you [source: Board Pass]. That can put you at risk for a serious collision. Also yield to the rider in front of you. You can see them, but they might not see you, so they have the right of way.

As a final safety tip, don't try to get air until you are fully confident in your riding abilities. Big jumps look like a lot of fun, but they require excellent board control and balance to execute. Keep practicing and you'll keep yourself out of the hospital.

For lots more information on outdoor adventure sports, click on the links on the next page.