Is Longboarding Easier Than Skateboarding? 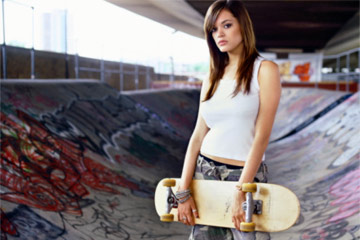 If you have your heart set on hitting the skate park in your free time, a longboard may not be the right skateboard for you.
Adam Gault/Getty Images

Some people might get offended if you say skateboarding is easy, but relatively speaking, few would disagree that it takes less time and effort to get used to the feel of a longboard [source: Krcmar]. With their long wheelbases and bigger decks, longboards give the rider more room to move around and find a comfortable stance.

But is longboarding really easier than skateboarding? The answer depends on a few key differences between the two activities. For one, longboards are designed specifically for turning and smoothly cruising at high speeds  over long distances. You could obviously argue then that for extended downhill runs, a longboard is going to be much easier to control than a skateboard.

Conversely, skateboards have evolved over the years for specific niche activities like hanging in skate parks, going for verticals on half-pipes and hitting the streets for some urban trick skating, so if your goal is to do some railslides and kickflips, a skateboard is going to be easier to maneuver.

However, if you're just a beginner and you're trying to get the feel of being on a board, you're probably going to have an easier time balancing on a longboard, which contributes to its reputation for being easier to ride [source: Krcmar].

When longboarding, especially in downhill racing events and competitive slaloming, all four wheels may lose traction during a turn. This common occurrence is a type of controlled, usually intentional, slide known as drifting, which is done typically to reduce speed or inspire awe in spectators. Drifting can be useful when entering sharp turns at high speeds that may be too tight to make [source: Soul Boards].