The Physics of Longboarding 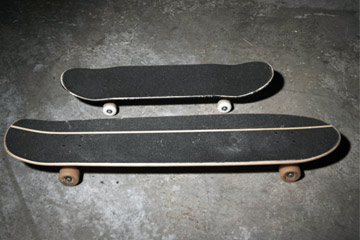 Longboards can be modified to specifications perfectly suited for each individual rider.
Thomas Northcut/Getty Images

First off, longboards are customizable for the intended purposes of you, the rider. But whether you're interested in downhill racing, slaloming (riding downhill in a zigzag fashion) or just getting to and from work or school, longboards share certain characteristics, which set them apart from other skateboards.

Compared to trick-oriented skateboards or shortboards, longboards are obviously longer and heavier. They also have those bigger and softer wheels that we mentioned, which can grip more of the pavement, increase your cornering ability and potentially prevent the board from shooting out underneath you. In contrast, the wheels on shortboards are typically going to be smaller, and harder, making them quicker with near-distance acceleration. The downsides are that they require more effort for the rider to gain momentum, and they're more vulnerable to sidewalk cracks, discarded soda cans and -- um -- roadkill [source: Karg].

In addition, softer wheels reduce vibration and afford the cruising longboarder a less bone-jarring ride. They're also set farther apart from each other than you'd normally find the wheels on a shortboard [source: Longboard Empire]. Longboard trucks, the collective parts of the skateboard that connect the wheels to the deck's underside, are designed to achieve a wider wheelbase. That wider distance between the front and rear wheels grants the longboard rider more turning versatility than his or her shortboarding counterparts.

A longer board makes the skateboard heavier, which also makes it more stable than a typical shortboard. With a heavier board, you're likely going to have more mass, and more massive objects will have more resistance to a change in motion, or inertia, as you'll remember from Newton's first law of motion. That's pretty handy, as a change in motion isn't all that good for helping you get where you're going. It also makes longboards more suited for downhill racing or slaloming than a shortboard.

Now that we've covered the difference between regular skateboarding and longboarding, we might as well ask -- which one is easier anyhow?

How Long Is Long?

Most longboards measure between 39 and 59 inches (90 and 150 centimeters) [source: Soul Boards]. For example, the Flying Spaghetti Monster deck made by Comet Skateboards is 40 inches long, 10 inches wide and has a wheelbase of 30 inches (102, 25 and 76 centimeters, respectively.)