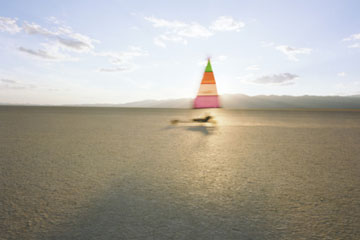 Imagine this: You're in your small sailboat, skimming along at speeds that top 50 or 60 miles per hour. The wind whips your face. Exhilarated, you skillfully guide your craft, moving the sail to adjust your speed. The landscape is a blur until you gradually head up into the wind and allow your sailboat to slow to a stop.

Then you step out of your boat, smiling, and walk over to the shade where your friends have been sitting, watching you sail.

No, you aren't walking on water. You're participating in an extreme sport called land sailing.

Some historians trace land sailing back to ancient Egypt and other cultures that used vehicles with sails for land transportation. Drawings exist of land sailors on the beaches of Belgium in the 1500s [source: Bassano]. These days, land sailing is popular in Europe, where it's called sand sailing. Boats race along sandy beaches at low tide, and racers may attract big-name sponsors. Land sailing also is popular in New Zealand, Brazil and other places with wide, open spaces.

In the United States, land sailing gained popularity in the late 1960s and has been growing and evolving since. Racing dominates the sport, with events like the annual Americas Landsailing Cup regatta. In 2010, the event will take place March 21 through the 26 in Primm, Nev. But enthusiasts also enjoy recreational sailing.

Most racing happens on the dry lakes (playas) of high deserts. Land sailors also can be found on some beaches and even on sports fields and in parking lots.

The North American Landing Sailing Association (NALSA), an organization of individual land sailing groups, was formed in 1972. NALSA affiliated itself with the older International Land and Sandyachting Federation (FISLY) in Europe, which had developed rules and standards for its races [source: Embroden].

Mark Harris, NALSA treasurer, said regular land sailors in the United States number in the hundreds, as compared to the thousands in Europe [source: Harris]. But NALSA leaders expect more people to take up the sport, because it's relatively inexpensive, safe and environmentally friendly. Prices of popular models such as the Manta start at less than $2,000 [source: Wind]. You don't need a dock, and the boat uses no fuel.

And best of all, land sailing is thrilling. Interested in trying your sea -- make that land -- legs? Read on to learn more about what makes land sailboats go.

The Physics of Land Sailing

Sailing on water and sailing on land have some things in common, but they also have a lot of differences. In fact, a land sailboat is really more comparable to a glider on wheels than a sailboat [source: Weber].

Land sailboats usually have three wheels and one sail. They go too fast to use jibs or spinnakers. (Jibs and spinnakers are the two main types of headsails, or sails used in front of the mainsail, on sailboats.) Made by several manufacturers, land sailboats range in size from a sailboard (sort of like a surfboard with a sail) on wheels to a huge land yacht.

In smaller boats, the sailor may sit or lie on the frame. Usually, sailors steer with their feet, moving a T-bar, which basically is two pedals. You push with the right foot to turn left, and with the left foot to turn right. Steering with the feet leaves the hands free to use a rope (also called a line or sheet) to maneuver the sail. The sail is used primarily to adjust speed, not for steering. For some maneuvers, such as going around a racing maker, the land sailor will use the sail, but mostly just to adjust the speed to allow for accurate steering [source: Bassano].

One brand, BloKart, uses a hand-operated tiller, so disabled people can sail.The tiller is a lever that helps steer; on a BloKart, it's attached to the wheels, while on a sailboat, it's attached to the rudder underwater that steers the boat [source: Blokart]. In larger boats, the sailor may be enclosed except for the eyes and top of the head in a long, low craft. These sailors look like they've been stuffed, in a reclining position, into a close-fitting rocket ship or experimental aircraft with a sail. In racing, rules in some classes say that standard boats cannot be modified, while open classes regulate only the size of the sail and allow sailors to experiment with designs.

The physics at work is the same as in water sailing, but the results are different because the conditions are different. Forces make things move, and forces can slow or stop moving objects. In sailing, the forces causing motion are the push of the wind on the sail and the pull of the air passing over the curve of the sail, creating lift much like on an airplane wing (but imagine it turned sideways). The forces holding back a water sailboat are the friction of the water on the hull and some friction of air on the boat and sails.

Land sailboats can go faster because their wheels face much less friction on dry surfaces. Because the whole boat is exposed to the air, land sailors meet more air friction, but that doesn't slow a boat nearly as much as water friction [source: Brinson].

Land sailing isn't just sitting back and letting the wind push the boat, though. Sailors must move the boat side to side to maintain that lift.

What's it like to go land sailing? Read on. 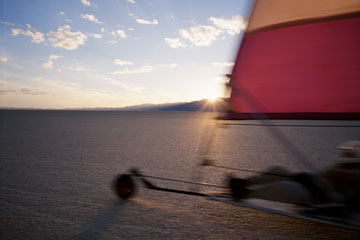 Take it easy, matey. If land sailing sounds interesting to you, don't just rush out and buy a dirtboat. Do a little research first:

But with those high speeds, can land sailing be safe? Keep reading to find out.

Land sailing is a little like real estate: Location, location and location. People who live near or visit the high deserts in the American West with their dry lake beds find ideal conditions. But land sailing enthusiasts in less ideal locations sometimes have to be a little more creative, heading for airstrips, large parking lots, stadiums and other open expanses. One of the most unusual sites ever used for land sailing in the United States was the cornfields in Iowa owned by a farmer named Randy Harmon. Back in the early days of the sport in America -- the 1960s -- sailors would launch their boats in the fields after the crop had been cut. As Nord Embroden writes in his article about the history of land sailing in America posted on the NALSA Web site, the "corn stubble provided an adequate but bumpy surface" [source: Embroden]. 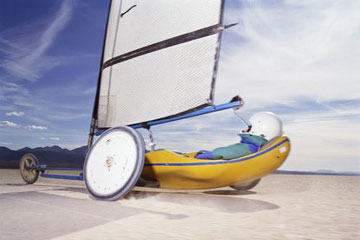 When you're likely to reach speeds of 50 miles per hour, it's a good idea to wear a helmet.
Ryan McVay/Getty Images

If you're flying along that fast in a boat with no real brakes, you could run into trouble. But land sailing is usually one of the safest of the extreme sports, if sailors use common sense. The first bit of common sense is using protective gear. Land-sailing tours and rentals insist on its use, and most land sailors use it as a matter of choice.

The main types of protective gear are:

The larger the area for sailing, the safer. On a huge dry lake, there's little to run into. If you have trouble figuring out how to slow or stop the boat, you have room to figure it out. So, how do you stop the boat? Essentially, you stop it by steering it directly into the wind. Coming to a complete halt may take quite a distance. Sailors in smaller boats may drag their feet to help when the boat has almost stopped. Larger, enclosed boats have something like a parking brake to bring the craft to a stop once its speed is down to 4 or 5 miles per hour (6.4 or 8 kilometers per hour).

Those who sail in smaller settings take more risks. In parking lots, sailors can run afoul of light poles and curbs. Problems can arise in popular land sailing areas. If too many boats are sailing close together, some are likely to run into each other.

One of the obvious safety advantages of land sailing over its water cousin is that land sailors are unlikely to drown. If something goes wrong, a land sailor can get out of the boat and start walking.

Until your skills are well developed, it's a good idea not to sail too far from camp or vehicle. If you injure yourself, you don't want to have to trek a long way across a dry desert lake to your vehicle [source: Bassano].

For more information on sailing and other sports, check out the links on the next page.