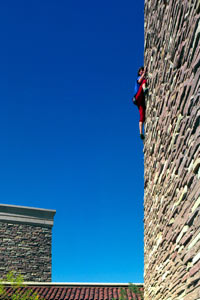 By the 1970s and '80s, climbers again started tackling the world's tallest buildings, making the feats of early climbers look like child's play. In 1977, George Willig, a toy maker for the Ideal Toy Company, took the day off work for "personal business" and famously scaled the 110-story south tower of the World Trade Center in about three-and-a-half hours using a self-made climbing device that fit over the window washer's scaffolds. Willig's homemade ascenders fit snugly into the channel between windows, enabling him to climb with relative ease and didn't leave a scratch on the building [source: Moses]. When Willig made it to the top, he was greeted by police officers. The city originally planned to fine him $250,000, but Mayor Beame then decided to fine him just $1.10 -- one penny per floor.

Then, in 1981, a climber from California named Dan Goodwin dressed up as Spider-Man and climbed the only skyscraper that was taller than the World Trade Center -- the Sears Tower in Chicago. Later that year, Goodwin again donned the Spider-Man suit and scaled Chicago's second-tallest building, the 100-story John Hancock Tower. Five years later, Goodwin completed perhaps his greatest accomplishment, climbing the 1,815-foot CN Tower in Toronto, which was the tallest structure in the world at the time [source: Paynter].

As remarkable as his climbs were, it wasn't long before Goodwin's feats were overshadowed by those of another daredevil climber. In the mid-1990s, a Frenchman named Alain Robert challenged himself to climb all of the world's tallest towers. Robert is famous for "free soloing" buildings, which is a climbing term for climbing without the aid of ropes or any other climbing equipment. "To Robert, safety contrivances are a form of bondage," wrote Lauren Collins in the New Yorker in 2009 [source: Collins]. Robert has also sported a Spider-Man costume, and he is the only other person to scale Chicago's Willis Tower (formerly the Sears Tower). Since then, Robert has gone on to climb many more tall buildings around the world.