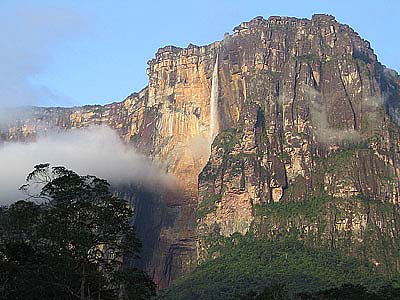 Instead of a ripcord, BASE jumpers release their pilot chute manually. For higher jumps, the pilot chute is stowed in an easily accessible pocket or flap, and the jumper pulls it free to release it at the right moment. This leaves both hands free during the brief freefall. If the jump is shorter, the jumper usually just holds the pilot chute in his or her hand [ref].

For jumps 300 feet or lower, BASE jumpers have almost no time at all to freefall and deploy a chute. They use a static line to deploy the chute automatically. This line runs from the jumper's pack to the object. During the jump, this line pulls the main chute open, and then separates from the pack.

Jumps from antennas are often the lowest and most dangerous types of jumps.
Image courtesy Rodolfo Clix/Sxc.hu

Skydivers don't have to worry about object proximity. They have to worry about hitting the ground, not the side of a building or cliff. But most BASE jumping fatalities are due to object impacts, rather than freefalling to the ground. The need for fast parachute deployments compounds the problem -- these deployments can send the jumper off into an unintended direction, such as straight into a granite wall. Jumpers call this an "off-heading opening."

Jumpers try to compensate by using a smaller ram-air parachute, one with seven air cells instead of nine. Modern parachutes designed specifically for BASE jumping have started to incorporate modified sliders that ease the suddenness of deployment, making it easier to avoid an off-heading opening.

Body position at the jump and deployment are key factors in determining the success of a jump. Jumping head first and rotating forward is incorrect. Keeping the body oriented so that the jumper is facing down, with the chute deploying behind him, is vital. On jumps with a few seconds of freefall, jumpers use tracking to direct the body away from the object. This means that the jumper "flies" away from the object using the aerodynamic shape of the body, instead of just falling straight down.

Canopy skills are vital as well. Once a ram-air parachute has deployed, the jumper may be carrying a great deal of forward velocity. Being able to steer properly and avoid slamming into the object could literally be the difference between life and death.

Next, we'll look at the status of BASE jumping and some statistics.