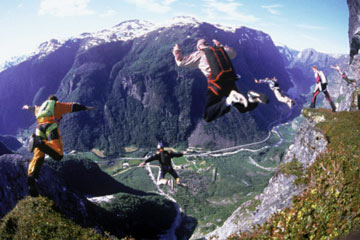 For BASE jumpers, leaping out of an airplane at 15,000 feet and freefalling at well over 100 mph isn't quite daring enough. To make things more interesting, they jump off various cliffs and man-made objects, usually at a low altitude with only a few seconds to deploy the parachute, and virtually no time at all to deal with problems or malfunctions. BASE jumping is so incredibly risky that it's actually illegal in many places.

The name "BASE jumping" is an acronym for the four types of objects that jumpers leap from:

There were isolated jumps off fixed objects in the 1960s and 1970s, but they were one-off stunts that sometimes ended badly. In 1966, two skydivers jumped off El Capitan, but their equipment was not designed for a BASE jump, and they both suffered injuries. In 1975, a jumper leapt from the World Trade Center's­ south tower and was arrested when he parachuted to the ground [ref].

­Modern base jumping was invented by Carl Boenish in 1978. He became convinced that modern skydiving equipment could allow for a safe jump off El Capitan. After several scouting trips, Carl and four friends hiked to the top and Carl filmed the four of them jumping. Everyone landed safely. Shortly after that, Carl and several other BASE pioneers came up with the BASE acronym for this kind of jumping -- an early alternate idea was BEST jumping (Bridge, Earth, Span, Tower) [ref].

Carl developed the BASE number system soon thereafter. Anyone who accomplishes a jump is recorded in a notebook. When they complete one jump of each type, they are assigned a BASE number in sequence of the people who have completed all four types before. Carl was BASE number 4. In 1984, he died while BASE jumping in Norway. Nobody witnessed the jump, but it is believed that he hit a rock outcropping [ref].­

­We'll take a look at how a BASE jump is performed in the next section. 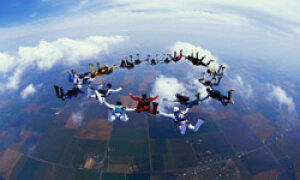 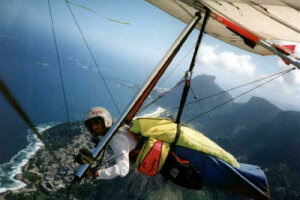