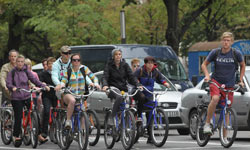 Tourists on bikes amid the traffic in Berlin. How do you stay safe when cycling in the city? See more sports pictures.
Sean Gallup/Getty Images

When it comes to life in a big city, change is the only constant. Buildings rise and fall, people come and go, and the pant sizes of the tragically hip become tighter and tighter. For current American city dwellers, however, it's not just the landscape of their urban oases that's transforming, but also the way they travel across it.

From New York to L.A., bicycle fever is taking hold as city folk turn to two wheels for exercise, adventure, and a cheap, fast and clean way to get from Point A to Point B.

In the Big Apple alone, where Mayor Michael Bloomberg has literally paved the streets in bike lanes, commuter bicycling increased by 262 percent from 2000 to 2010. Even in Portland (Oregon, not Maine), where the number of bike shops is rivaled only by the plethora of microbreweries, ridership continues to tick up [sources: NYC Dept. of Transportation, Rose].

With the increase of spokes on the streets, however, has come a rise in bike-related accidents, including those resulting in fatalities. According to the Centers for Disease Control, more than 500,000 people are treated for bicycling injuries in emergency rooms across the U.S. each year.

Navigating chaotic city streets on a bicycle requires not only good balance and properly inflated tires, but also sharp attention, an understanding of basic traffic laws and respect for one's fellow travelers. Read on for pointers on how to safely cruise amid the bright lights of the big city.