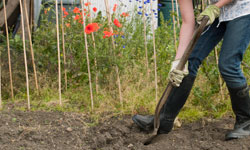 Believe it or not, gardening is good exercise.
Image Source/Thinkstock

I know, I know. Gardening? That doesn't seem like much of a workout. It turns out, though, that all that kneeling and digging can burn more calories than you might think.

While many urban residents don't have a big yard (or any at all), most cities have community gardens that residents can tend to collectively or divide up and grow their own individual plots. The practice is good for the environment because it reduces the fossil fuels needed to transport food from larger farms, but it's also good for the gardener's health. A 180-pound (81-kilogram) green-thumbed city dweller could burn a surprising number of calories by spending 30 minutes on the following chores [source: Morales]:

These activities are only considered moderate exercise, but that doesn't mean you can't get hurt doing them. Use a cushion for your knees and try to keep your back straight when kneeling. Stand up every 10 minutes or so and stretch your legs, and try to vary your activities when you can. If you're doing a strenuous activity like digging, try to break it up with some light planting or weeding.

Finally, it's a good idea combine gardening with aerobic workouts like cycling, jogging or swimming. This type of exercise improves lung function and strengthens the heart, which are two benefits you aren't likely to get from gardening.

I grew up in a small southern town in a modest house with a big yard. I spent evenings and weekends playing in the sandbox, tossing the baseball with my dad, or exploring the small forest adjacent to our property. I didn't realize how lucky I was to have so much space in which to exercise and play. More recently, I lived in a community of about 200,000 people, small by city standards but big enough to limit my exercise opportunities. I didn't want to join a gym, and I was often forced to jog or bike down busy downtown streets for exercise. Now I'm again living in a small town, this time in Utah with a national forest less than a mile away. But I'm not going to take my recreational possibilities for granted this time!