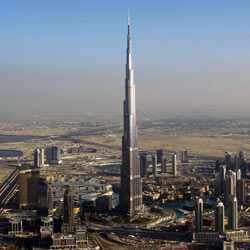 In 2010, two men were allowed to jump off Dubai's Burj Khalifa Tower, the tallest structure in the world.
AP Photo/Kamran Jebreili

If you can't BASE jump off the tallest structure in the world, what's the point? In 2010, Nasr Al Nivadi and Omar Al Hegelan, asked for, and were given permission to jump off the Burj Khalifa Tower, in Dubai. Standing at 2,716 feet (828 meters), the tower is the tallest structure in the world. Al Nivadi and Al Hegelan jumped from the Burj Khalifa Tower a day after it officially opened, and set a new world record for the highest base jump. It was over pretty fast, though. Falling at 136 miles (218.87 kilometers) per hour, it took the two men just one minute and 30 seconds to reach the ground. [source: BBC].

Author's Note: The 5 Most Popular Spots for BASE Jumping

OK, I talk a good game, but I would never BASE jump. It looks awesome, it looks fun, but not for me. These days, I lose my lunch on a roller coaster. I suppose I've just gotten old. Bungee jumping was probably the most extreme thing I've ever done by choice. I was a young reporter, and even back then, I had to be talked into it by a photographer who came up with the idea.