by Becky Striepe
Prev NEXT
6

Kat Siegert diplays her hash member name on a necklace May 25, 2011, at Backyard Tavern in Augusta, Ga. The group met to participate in non-competitive running, socializing and drinking event based off the British children's game Hounds and Hare. © Corey Perrine/The Augusta Chronicle

Most of the time, running carries a pretty minimal risk for arrest. As long as you're out of the way of drivers and following the rules of the road (or participating in an officially sanctioned event that has all the right permits and permissions) you probably won't wind up on the wrong side of the law.

But the Hash House Harriers add a potentially volatile ingredient to the mix: beer. Reportedly started in Kuala Lumpur in 1938, hashing, as it's come to be known, started out as an effort to promote fitness, get rid of hangovers, and work up a thirst (then quench it with beer). To put it very simply, hashers run, and then they drink.

It's no big deal when done responsbily. But the blog of the Flagstaff (Rogue) Hash House Harriers boasts of everything from blocking traffic to breaking elevators. A hasher was arrested for trespassing at a hashing event in 2013 [source: Swanson]. 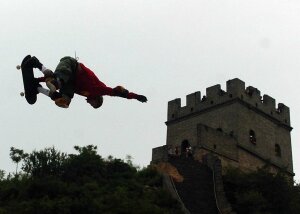