How many triathlons can I race in a season? 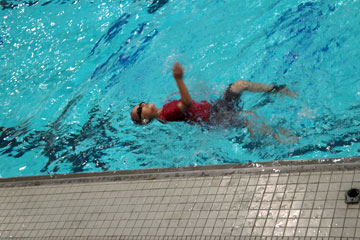 If you've got the triathlon bug, you may be ready to race several times a season. But don't get pulled under by the spirit of competition!
Photo courtesy Alia Hoyt

Triathletes don't mess around -- they mean business. They take their commitment to the event very seriously, logging impressive (not to mention exhausting) hours swimming, biking and running in preparation for competition. Experienced triathletes know how to train and what to expect at an event, but beginner- and intermediate-level participants might require a little extra guidance as they dip their toes in the water, so to speak.

If you're training for an event as intense as a triathlon, it's best to err on the side of caution, which means knowing the event's requirements, your capabilities, how to train and, most importantly, when to take a breather. A lot of triathletes ask how many triathlons they can safely complete in a season. That's a tough question, and here's why.

Every year, more and more people catch the triathlon bug, thrilled that they've found a sport that offers exciting variety, pushes their limits and can be enjoyed at any age. The numbers don't lie -- membership in USA Triathlon (USAT) during the 1990s peaked at 21,000. As of June 2010, nearly 135,000 members were registered with the organization, not including the other few hundred thousand who buy one-day memberships to compete in single events. When newbies complete a triathlon, their instinct is often to sign up for another … and another … and another. Experts caution against overdoing it, however.

"A lot of beginner and intermediate athletes can do a couple of races per year as long as long as they are spread out in their training plan, so they have time recover between races," says Linda Cleveland, coach development manager for USAT.

In fact, a relatively new competitor who tries to cram more than a couple of events into one season might be able to cross the finish line, but his performance at the third or fourth could suffer due to exhaustion. It's best to work up slowly over the course of several seasons, performing in a couple of triathlons really competitively, rather than participating in a handful at a fraction of your ability.

Moving up the triathlon ladder slowly isn't all about sparing your ego. There are many valid health issues to be mindful of, including old-fashioned heat stroke and underlying heart issues that can be triggered by overly intense exercise. Safety concerns are also of paramount importance. Swimming and biking en masse can be extremely tricky and even dangerous for beginners, especially if you're physically exhausted from too-frequent events.

That said it's tricky to put a hard and fast number on the amount of competitions you should enter in a given season, if for no other reason than the fact that every single triathlon is different. Sprint or standard distance triathlons aren't as taxing as long-distance events. Some events are flat; others are full of hills. Some hold the swimming portion in lakes or pools, while many feature more challenging ocean swims. Take into account the varying climates (hot and humid vs. cool and dry), and you can see how an equation is difficult to come by. To that end, beginners or intermediates who want to reach elite status by competing in several events per season might consider seeking the help of a triathlon coach.

"If you have someone helping you with your training plan, they can help you decide whether you're ready for the next race or not," says Cleveland. "A good coach is helpful with planning and preparation and getting people to do their best at those races."

Who knows? With a little (who are we kidding -- a lot) of extra effort, maybe you, too, can eventually work up to elite triathlete status. Cleveland knows of athletes who compete in more than 17 events per year and multiple Ironman races. That may be just a dream to a beginner, but give yourself a few seasons to gauge your skill level!

How to Flip Turn
How to Get a Fast Triathlon Swim Start
Should I stand or sit when riding uphill?